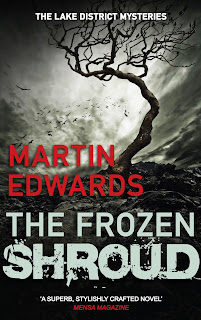 The Frozen Shroud is published in the UK today by Allison & Busby. What, if any, reaction will this event, admittedly rather more momentous for me than for anyone else, provoke? One thing is for sure - it's a mistake for writer to devote much time to waiting for reviews. For a start, they might never arrive. You'd be surprised how many really gifted and long-established writers experience a lack of reviews of their excellent books. Even Harry Keating, about whom I wrote yesterday, a man who won two Gold Daggers,the Diamond Dagger and much else besides,found it far from easy to get his last few books reviewed in the national press - and he had for many years been a critic for national newspapers himself. Fortunately, online reviews have become more significant and much more numerous in recent years.

Another thing to fret about is that the reviews might not be kind. It's all the more a risk when one has tried to  take one's series in a slightly different direction, as I have done with The Frozen Shroud. But any writer of entertainment fiction is bound to be anxious to know whether their latest effort works for readers. And I'm no exception.

Due to the curious quirks of the publishing world, The Frozen Shroud has appeared in the US a little before its appearance in the UK edition. And this has meant that I've had a preview of reader reaction from reviewers of the American edition. I hope it's an indication of how British readers will respond, since the reviews have been gratifying, and there have been plenty of them so far, which makes me feel rather lucky.

Writers sometimes tend to feel insecure, and even if we're not insecure, we like to be told positive things about our books. Bad reviews hurt, and often stay in the memory longer than good reviews. But at the same time an author has to be realistic. You can't expect even your fans and your friends (even your family!) to like every book you write in equal measure. Constructive and supportive criticism, as long as it's delivered in a positive and sympathetic context, can be helpful. Anyway, that's what I keep telling myself, and I'm fairly sure I believe it when my books are being reviewed, not just when I'm reviewing books by others!

Reviews of The Frozen Shroud to date have just been uploaded on to my website. Of course I'm pleased about the nice quotes from Mystery Scene, Publishers' Weekly, Kirkus Reviews and so on, as well as the line:"One of those novels that plays with your mind..." from Readful Things. I'm rather flattered by the idea of my novel playing with my reader's mind, I must admit. But the reality is that, like most crime writers, I'll be content as long as reviewers and readers find my work enjoyable to read.

Nice cover art, makes me want to read the book.

Margot, Keen Reader, Chrissie - many thanks.

Congratulations, Martin! Best wishes for your book - I loved it!

Well done Martin. There's a review about to be published on my blog

Margaret, Kerrie, thanks as always.