When I wrote the other day about David Tennant's excellent performance as a psychopathic serial killer in Bad Samaritan, it didn't occur to me that I'd soon be singing his praises again, for his performance of a real life murderer. He takes the lead in the ITV drama series Des, which is running this week, playing the serial killer Dennis Nilsen. I've watched the first two episodes full of admiration for his chilling portrayal of a dead-eyed man without a conscience. 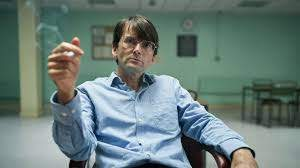 Nilsen's bizarre and horrific crimes were revealed back in 1983 and I remember the case vividly. He had worked as an employment adviser in a jobcentre in London and through a personal connection I learned a little bit about him. He wasn't a popular man, although everybody who knew him was astonished to learn of his crimes. He was best known as a trade union representative, a virulent left-winger who hated the government. All his victims were vulnerable people.

Tennant is superb, and I don't think it can sensibly be said that this programme glamorises his crimes. Far from it. The material is sensational, but the scripts of the first two episodes treat it with sobriety. There is a proper focus on the quest to identify the victims. The main challenge faced by the writer, Luke Neal, is to maintain tension, given that Nilsen admitted his killings from the outset, and we all know that he died in prison. The real mystery is about what motivated him.

So far, we've been given a few clues. The main source material is Brian Masters' book about Nilsen, and Masters is a major character in the story, again very well played, by Jason Watkins. I'll be interested to see how the third and final episode brings the story to a conclusion. At the moment, there's a division of focus between the police's efforts to investigate and Masters' relationship with Nilsen. I wonder if the script writer considered taking the unorthodox step of telling the story mainly from Masters' point of view. That would have been a very bold approach, and may have paid dividends, but the method actually adopted in telling the story has so far been fairly effective. I look forward to the concluding episode.