When I featured Derek Marlowe's A Dandy in Aspic as a Forgotten Book recently, I mentioned Joseph Goodrich's new book Unusual Suspects, published by Perfect Crime. I'm delighted to say that my copy has just arrived and I'm enjoying reading it all over again. I say 'all over again' because I had a sneak preview of the contents when Joe asked me to write a foreword. Having admired his utterly fascinating study of the relationship between the two cousins who masqueraded as Ellery Queen, Blood Relations, I bit his hand off! 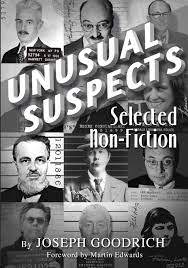 This is just the sort of book I enjoy, a collection of pieces about crime fiction that doesn't follow a predictable path. As I said in my foreword, 'the essays are always well-informed and skillfully composed, but what counts most for me is their enthusiasm - a vital ingredient in a book of this kind.' Joe says in his own intro that the collection comes from his 'passion for books', and this shines through.

The authors discussed range from the famous - such as Dashiell Hammett and, of course, Ellery Queen - to the rather less well-remembered, such as Marlowe. A discussion of Frederick Irving Anderson nestles alongside an appreciation of the multi-talented Nicholas Meyer, with whom I had a very enjoyable dinner in Scottsdale a year ago, not realising that I was on my last overseas trip for a long time. There's an account of Amnon Kabatchnik's massive set of books about mystery plays and a pithy discussion about Lucille Fletcher which concludes that her books deserve a renaissance: I very much agree. And there's much more, too.

Joseph Goodrich strikes me as an ideal companion to go with on a wander around the by-ways of criminal fiction, on the page, on the stage, and on the screen. He has a knack of highlighting what matters about a book or a writer in a few words, a real and rather uncommon talent. He has already received one Edgar, for his play Panic, and this book, although very different, seems to me to be destined to earn him further acclaim. Strongly recommended.