Forgotten Book - A Dandy in Aspic 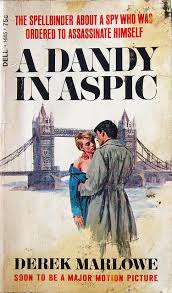 All too frequently, I find I need a nudge to get round to doing something I meant to do ages ago. And this is sometimes true as regards reading books as well as less pleasurable tasks. Take Derek Marlowe's A Dandy in Aspic, for instance. I first read about this one many years ago, in Julian Symons' Bloody Murder. I thought it sounded interesting, especially given that he compared it to Kenneth Fearing's The Big Clock, but somehow I never made much of an effort to track the book down.


The nudge I needed came when Joseph Goodrich asked me to read the manuscript of his book Unusual Suspects with a view to providing an introduction. Joe is an interesting and versatile writer and I was glad to agree. What I didn't expect was that his book would include a long piece about Derek Marlowe's life and career. This was quite fascinating and I went straight out and picked up a paperback of A Dandy in Aspic.

I'm glad I did. This is in some ways a flawed book, but the central idea is appealing, and the execution is, for the most part, highly entertaining. Our narrator is a chap called Eberlin. He works for the government, but it soon become apparent that he is a Soviet agent. Not only that, he is a hitman. The British secret service are concerned that some of their agents are being eliminated. So who better to hunt down the assassin? Eberlin, naturally...

The mannered style of writing is occasionally irritating, but on the whole adds to the enjoyment. My copy describes the book modestly as "the most brilliant spy novel of the decade". Wow! Given that Fleming, Le Carre, and Deighton were hard at work in the 60s, this is the wildest of hype. But the novel was filmed, with Laurence Harvey and Mia Farrow, and my next objective is to watch the movie version. I'm glad I finally read the story, and my thanks go to Joe Goodrich for giving me that all-important nudge.
Posted by Martin Edwards

I rather like the film version, though it isn't superb, but haven't yet tried the novel...sounds like it's also not a life-changer, but worthwhile...thanks!

Derek Marlowe was an interesting writer, one who never settled into a single genre. Apparently he wrote A Dandy in Aspic in a few weeks when he shared a flat in Vauxhall with Tom Stoppard and Piers Paul Read, and he was the first of the trio to have a real success. I wrote the entry on Marlowe for Barry Forshaw’s British Crime Writing Encyclopedia a few years ago, and enjoyed reading some of his other novels like A Single Summer with L.B. In keeping with his name, he wrote a Chandler pastiche, Somebody’s Sister, though it’s not particularly good. Dandy is probably his best, certainly his best-remembered, book. It must be unique in Cold War spy fiction in that the hero is trying to get away over the Berlin Wall in the wrong direction, west to east.

Thanks, Todd. I look forward to seeing the film.

Thanks, Philip. That's very interesting. I'm sure you'll enjoy Joseph Goodrich's discussion of Marlowe in Unusual Suspects. As you say, Dandy is unique in that way.