Mortmain Hall - the US edition

Mortmain Hall has just been published in the United States by Poisoned Pen Press and I've been delighted by the reaction so far. This includes a coveted 'starred review' in Publishers' Weekly, who say the book 'is a triumph, from its tantalizing opening, in which an unnamed dying man begins to explain an unspecified perfect crime, through its scrupulously fair final reveal'. What's more, the novel has been selected as one of Apple's best books of September, and was included in CrimeReads' list of the most anticipated books of the season and featured by Mystery Tribune as one of the best of the month. 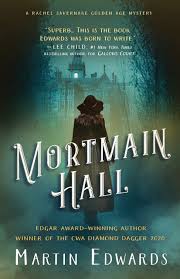 All this is gratifying, especially given that I wasn't sure how this particular novel would be received in the US, given that it's very different from so many other books which pay homage, in one way or another, to the Golden Age detective story. It's not a cosy or a pastiche and it's even quite different from its predecessor, Gallows Court. Certainly it's a story that calls for a degree of investment from the reader, since the nature of the central mystery is withheld for some time, and the characters don't actually gather at Mortmain Hall until the last third of the book. There are bound to be some readers who don't 'get' it. But that's a risk worth running. I've always liked to experiment as a crime writer, and to try fresh approaches to storytelling (in my non-fiction as well as in my fiction) and writing Mortmain Hall was a truly exhilarating experience.

Sadly, of course, there are no trips or events for me in the States to promote the book. But things are still happening. I've just taken part in a Youtube conversation with Ann Cleeves, hosted by Barbara Peters, discussing our new novels, and I'm also involved in 'virtual Bouchercon' in lieu of the real thing, which was scheduled for Sacramento. I was asked to interview Anthony Horowitz, but rather than meeting in person we've had to record our event from Europe, while I'm also due to take part in a panel about classic crime

All in all, therefore, I'm grateful for the way things have turned out, despite the pandemic. But I'm very much hoping that I'll be able to make it across the Atlantic next spring. I've missed Malice Domestic for the past couple of years and I'd love to go back there, as well as to attend next year's Bouchercon in New Orleans. Will it be possible? I don't know, but in the meantime I hope that more American readers will enjoy taking a trip to the north Yorkshire coast to find out what was really going on at Mortmain Hall.

And thank you, Jose Ignacio, for that marvellous review!

I enjoyed Mortmain Hall very much - and hope to get a copy as a birthday present for a friend. The only hesitation is that my memory of the series suggests that it makes sense to start with Gallows Court in terms of getting to know the characters; otherwise I think my friend would like the genre of Mortmain Hall better. Is the cover on this post for the US edition? I do like the other cover. :)

Hi Jonathan. Thanks - this kind of feedback is always helpful as well as interesting and encouraging. There is a sizeable minority of people (Jose Ignacio is another) who feel that it's better to start with Gallows Court. I didn't think that would be the case when I wrote it, and it's a factor I may well bear in mind when I get to book three. Yes, this is the US cover - very different. There was some 'market testing' undertaken by the American publisher, I gather, and this one came out ahead of the UK version - for the American market, which is rather different (in ways I don't fully understand) than the British when it comes to cover artwork...

Hi Martin, from my recollection, I think the plot Mortmain Hall makes good sense on its own for the reader who begins there. But I also wonder if such a reader loses out on the characterisation, especially with respect to who Rachel is and what she's like - as well as her dynamic with her servants and Jacob.

Being a GA mystery fan, I like Mortmain Hall better, being as a mystery with thrilling elements, in comparison to Gallows Court, which seems to me to be more of a thriller with a mystery element. I very much enjoyed both, but I suspect it'd be easier for my friend to receive Gallows Court as a gift, and then proceed on to Mortmain Hall - than to move in the reverse.

Incidentally, I just started on 'First Cut is the Deepest'... Looking forward to seeing how Harry digs himself out of the hole he got himself into!

Thanks, Jonathan. I think your description of the differences between the two books hits the nail on the head. As for First Cut, writing those early scenes certainly entertained me!