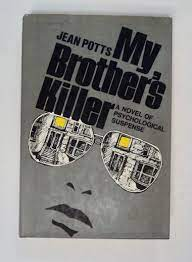 My Brother's Killer was first published in 1975, when its author Jean Potts was 65 years old. She lived until 1999, but never wrote (or at least, never published) another novel. I don't know why she gave up - perhaps she lost enthusiasm or simply decided it was time to retire from the writing game. Maybe she wrote something else and it was rejected. Possibly she was disappointed by reaction to this novel - there is a distinctly cool review from Kirkus that can be found online. Yet although it's quite a slender book, I found it very readable and, judged as a swan song, not at all bad.

Events are seen from a number of different points of view, but essentially this is an 'inverted mystery'. As the (rather clever) title implies, the story concerns the attempt of one brother to kill another. (Incidentally, another book with the same title, by D.M. Devine, is discussed  here  Garth Sullivan is the bad guy, although Potts does round him out as a character. He's always hated his brother Howdy, and in recent times his loathing has reached fever pitch. Howdy was (unintentionally) responsible for an accident which prevented Garth pursuing his chosen career and to make matters worse, he married Pam, the only woman to whom Garth had ever been devoted.

Howdy, too, is well characterised. He is naive but has a persistent feeling of responsibility towards Garth, and he arranges for Garth to live in the same building as him and Pam. The other residents include a young woman, Eunice, with whom Garth has a brief fling. It means nothing to Garth, but a great deal to Eunice. Her simple devotion to him will play a crucial part in the unfolding events.

I shouldn't say much more about the plot, but although it's not mesmerising, it's sound enough. As always with this author, much of the pleasure of the book lies in her delineation of her people and her ability to build tension in a domestic environment. Jean Potts was undoubtedly a writer of considerable gifts, and although this is by no means her best book, it's a good example of her craft.