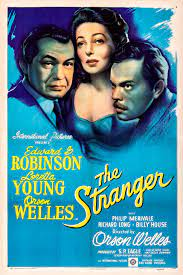 The Stranger is an intriguing film noir from 1946. It's really a story of a cat-and-mouse relationship between a Nazi hunter called Wilson (Edward G. Robinson) and a superficially charming professor (Orson Welles, who also directed and co-wrote the film) who is actually Kindler, a Nazi who has escaped to the United States and reinvented himself as a plausible academic who marries a judge's daughter (Loretta Young).

Despite the fact that The Stranger was made so soon after the war ended, it gives a powerful sense of the horror of the Holocaust, even if the details of Kindler's backstory are rather vague. The story begins with a reformed ex-associate of Kindler's making contact with him - on the day that the villian of the piece is due to get married - unaware that Wilson is on his case. The wedding does take place, but Kindler also finds time to kill his former crony. There is a great scene in the woods which involves Kindler hiding the body and risking discovery when a bunch of his students run through the woods on a paper chase.

The principal writer is Anthony Veiller, whose other work included The List of Adrian Messenger. In many ways, though, it is the visual ingredients of the film rather than the storyline - tense as it is - which make it worth watching. The climactic scene, which takes place at the top of a clock tower (Kindler is obsessed with clocks) is especially memorable.

Orson Welles was a towering figure in the film world, even if his achievements were somewhat mixed. I liked his performance as Kindler, even though it's by no means his most acclaimed role. The Stranger isn't a masterpiece, but it's not mundane, either. Well worth a watch.