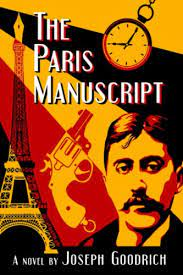 Joseph Goodrich is a versatile writer whose play Panic won an Edgar award, and whose book about the extraordinary correspondence between the two cousins who wrote together as Ellery Queen, Blood Relations, provided invaluable raw material for one of the chapters in The Life of Crime. His book of essays, Unusual Suspects is also extremely interesting, with rare insights into the work of a range of writers, including that odd but talented character Derek Marlowe. Not content with these achievements, Joe has written short stories and now his novel The Paris Manuscript has been published.

The new book is a history-mystery, set primarily in the French capital shortly after the First World War. It is what Harry Keating used to call a 'looking-back' book, in which Ned Jameson reflects anew on what happened in Paris in the days when he was a young reporter, married to the lovely Daisy, whose brother runs into trouble because of his susceptibility to blackmail.

Murder is committed, and Ned thinks he knows whodunit, but the real amateur detective in the story is none other than Marcel Proust. I must confess that I've never read Proust, but Goodrich presents him as an appealing character. This is an off-beat story that I enjoyed reading.

I should also mention Shooting Script and other mysteries, a book edited by Joe Goodrich, which gathers short stories written by that splendid duo William Link and Richard Levinson, who are most renowned as the creators of Columbo. I'm quoted on the back cover, enthusing in particular about their debut story, 'Whistle While You Work', and believe me, it is a real gem. All in all, this is another good read, courtesy of those excellent publishers Crippen & Landru.

Proust famously lived in a sound-proofed room which he never left, attended by a loyal housekeeper, when he dedicated himself to writing, so he could be regarded as a real-life equivalent to Mycroft Holmes or Nero Wolfe.

Thanks, Roger. Yes, on the evidence of this story, he's a pretty good choice for a real life historical detective.