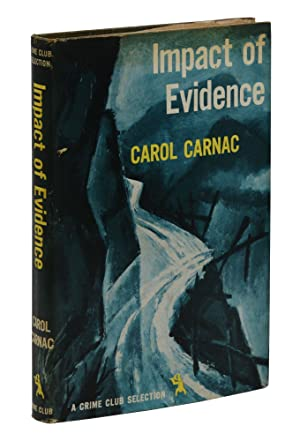 Impact of Evidence is a novel by Carol Carnac (better known as E.C.R. Lorac) which was published in 1954, towards the end of her life. Beyond doubt, it can safely be described as a forgotten book. I've never read a review of the novel and at the time of writing, only one copy is for sale anywhere in the world - for the less than modest cost of £650 for an American first edition (pictured). One wonders what price a UK first in a jacket would command. As far as I know, there was never a paperback edition.

Does the novel deserve such obscurity? My answer is an emphatic 'no'. This is a novel typical of the Lorac stories that she wrote from the 1940s onwards, after moving to live in Lunesdale. But it's not set in Lunesdale. The action takes place on the English-Welsh border (towards the southern end of that border; towns such as Hereford are mentioned in passing). Yet in many ways, the setting is strongly reminiscent of Lunesdale. I suspect the main reason that it wasn't set there was that the author was trying to differentiate her two series (which did have a great deal in common).

Lorac was a keen driver, as readers of Two-Way Murder will appreciate. This Carnac title again reflects her interest in motor cars and centres around an accident in the snow that involves two vehicles, one of them driven by elderly, infirm Dr Robinson, who dies in the crash. But when people look inside his car, a second body is discovered. The deceased is not a local, and he died before the accident. What on earth has been going on?

This is a pretty good premise for a traditional detective story and Inspector Julian Rivers of Scotland Yard turns up to conduct the investigation. We learn that he spent some of his early days on a farm in Norfolk and it's clear that, like Inspector Macdonald in the Lorac books, his burgeoning interest in the countryside and the challenges of farming life reflects his creator's enthusiasms. As so often with these books, the evocation of rural Britain is the strongest point, but I'd add that the plot is very soundly constructed. If you're a fan of traditional mysteries, this is a most enjoyable read.

I agree with you on this one - it's pretty good, although the behaviour of one character towards the end is hard to explain. I feel lucky to have found a copy at all, even though it's not in perfect condition. A lot of the Carnac titles seem to be scarce, particularly those in the earlier Inspector Ryvet series - have you ever seen any of these?

Thanks, Jonathan, I don't think I have seen any of them, but there are one or two in my possession that I haven't got round to yet.