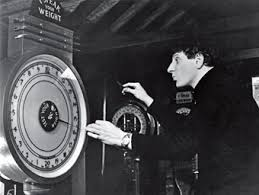 When I was a student, especially in my first couple of years before the shadow of Finals loomed, I set about expanding my reading and trying to broaden my cultural awareness (the latter is still a work in progress after all these years, but I haven't given up trying!). Oddly, perhaps, I read very little crime. Among many other things, I was keen on Theatre of the Absurd, the subject of an excellent book by Martin Esslin, and went to see plays such as A Resounding Tinkle, by N.F. Simpson, a playwright I really enjoyed.

Now, after all these years, thanks to Talking Pictures TV, I've seen the film version of Simpson's most famous play, One Way Pendulum. The director was Peter Yates, who became much better-known for films like Robbery, Bullitt, The Friends of Eddie Coyle, and The Deep. It's fair to say that this movie was not a great commercial success, but I think he made a pretty good job of filming a play that many might think was almost unfilmable.

The film covers a Saturday afternoon in the life of the Groomkirby family, for whom the description 'eccentric' is hardly adequate. Mr Groomkirby (Eric Sykes) build his own version of the Old Bailey in his modest home, while his wife (Alison Leggett) makes so much food that she hires Mrs Gantry (Peggy Mount) to eat it all up to ensure there are no leftovers. Their daughter Sylvia (Julia Foster) is fascinated by apes, and worried that her arms aren't long enough, much to the bemusement of her boyfriend Stan (Kenneth Farrington), one of the very few 'normal' people in the story.

As for young Kirby Groomkirby (Jonathan Miller), he seems amiable enough but is clearly disturbed in some way and concentrates his energies on training speak-your-weight machines which he has stolen to sing the 'Hallelujah Chorus'. His father becomes embroiled in a fantasy trial of Kirby for mass murder, which is presided over by a judge, played by Douglas Wilmer, better known for his excellent portrayal of Sherlock Holmes at much the same time. There are some funny lines, and although the film misfires, it isn't hard to see in Simpson's work some of the ingredients that would soon make Monty Python's Flying Circus such an iconic show.

This film was news to me and I must seek it out. I have followed the multi-faceted career of Jonathan Miller, polymath, ever since I saw him and his 3 talented mates in Beyond the Fringe on Broadway in 1963 (I was 17 at the time). I found a delightful one minute clip on YouTube showing Miller rehearsing his chorus of weighing machines. Prophetic, since later in life Miller was directing operas, and complained often of recalcitrant choruses. Many thanks for the tip.