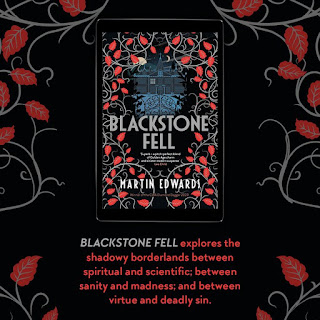 Tomorrow sees the US publication of The Life of Crime, and marks the start of a very interesting few days. On Thursday, Head of Zeus publish my third novel featuring Rachel Savernake and Jacob Flint, Blackstone Fell, a book I'm excited about. On Friday I'm interviewing Ann Cleeves in Carlisle and, after a stopover in Birnam, I'll be heading to the Nairn Book Festival, where among other things I'll be in conversation with Josephine Tey's biographer, Jennifer Morag Henderson.

Blackstone Fell is a book I dreamed up and wrote during the pandemic, although the original glimmer of inspiration came a little earlier, when I visited Salomons Tower in Kent. A post-lockdown trip to Hardcastle Crags in Yorkshire gave me the main elements of the setting, and a trip to Kinver Crags was also helpful. I've written an article about the book's locations for TripFiction and there's also a piece about Golden Age crime that will be appearing in the Daily Express, as well as short essays in Shots and Crime Time. A little closer to Christmas, My Weekly will be featuring the book alongside a new short story in the Golden Age vein which brings back a character I've written about previously. 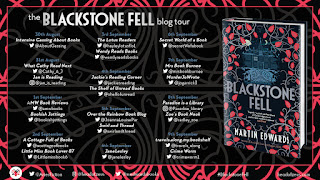 Sophie, the publicist working with Head of Zeus on the novel, has kindly arranged a very extensive blog tour, involving bloggers who in general haven't covered my work in the past. It will be interesting to see what they make of the book. Suffice to say that ingredients include a locked room mystery, a cipher, a sanatorium, a seance, and a Cluefinder. Yep, it's a complex puzzle all right. I enjoyed writing the story enormously and I hope crime fans will enjoy reading it.

The Life of Crime has already received quite a bit of coverage in the US, including this podcast with the American Scholar magazine. An article on CrimeReads - discussing an obscure Russian writer and his unexpected connection with E.R. Punshon - is also imminent. So - lots going on. And meanwhile, I'm working on the closing chapters of Rachel's next adventure - Sepulchre Street.