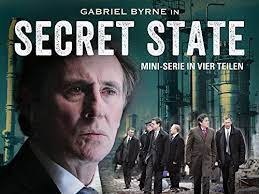 I missed Secret State when it first aired on Channel 4 in 2012 and have only just caught up with this four-part conspiracy thriller. It's based (rather loosely, I'd imagine, given the topical references) on a novel written 30 years earlier. That was A Very British Coup, by Chris Mullin, which was also adapted for television in the 80s by Alan Plater, though I've never seen that version. Mullin was, at one time, a well-known MP, on the left of the Labour Party. Many years ago he gave an after dinner speech at a CWA conference, which I recall as very entertaining.

This screenplay is by Robert Jones and it's pretty taut, although in the later stages the sub-text, very critical of Tony Blair's government's 'dodgy dossier' about Iraq, comes into the foreground and is perhaps a little heavy-handed. But it certainly gets off to a gripping start, and my interest was maintained throughout. This is in part due to a strong cast led by the excellent Gabriel Byrne, playing Tom Dawkins, who is propelled into the position of Prime Minister following the death of the PM in a mysterious plane crash.

The biggest villain in the story is a US petrochemical company, responsible for a devastating industrial accident on Teeside that cost many lives. Dawkins becomes suspicious about what has happened, egged on by an investigative journalist (Gina McKee). The elements of the story about senior politicians jockeying for power are really well done, and Rupert Graves is wonderfully slimy as Dawkins' prime opponent, while Charles Dance is terrific as the Chief Whip. There's also a good role for Douglas Hodge, as Dawkins' friend, who drinks too much for his own good, and another for Ruth Negga, as a concerned analyst at GCHQ.

If you enjoy a good conspiracy thriller, this one measures up well and doesn't outstay its welcome. I'm glad I finally caught up with it.

Good evening, Martin
I think if I watched 'Secret State' again ten years on I'd probably enjoy it more. At the time I seem to remember thinking it was ok, but it suffered from not being 'A Very British Coup' - or at least not being Alan Plater's 'A Very British Coup' starring Ray McAnally, which was somewhat better than the source novel...Do try and see it - I think it would stand up today, pretty well.
Incidentally, there was a BBC conspiracy thriller in 1985 called 'In the Secret State', which I recall enjoying quite a lot, based on a novel by Robert McCrum & starring Frank Finlay - it is on YouTube, although I've no idea what the picture quality is. (Would be nice if the BBC could put these dramas up on iPlayer...) One of quite a few conspiracy dramas around that time, led by the peerless 'Edge of Darkness'.
(Dipping in and out of The Life of Crime - should keep me happily occupied for some time to come!)
Mike

Thanks, Mike. These are very good recommendations, and I hope to follow them up. I was hugely impressed by Edge of Darkness, though probably more by the earlier episodes than the later ones. Glad you're enjoying the magnum opus!