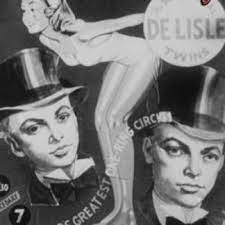 If I'd watched Dual Alibi a year or two earlier, I'd probably have given it a mention in The Life of Crime. This 1947 British film fits, thematically, into the chapter where I discuss the work of William Lindsay Gresham, Fredric Brown, and others. I'd say it's one of the best examples of film noir to have emerged from the UK in the Forties. And it provides a rare starring role for that interesting actor Herbert Lom, today better remembered as the crazed cop in the Pink Panther movies.

Most of the story is told in flashback after circus owner Vincent Barney (played by Ronald Frankau, whose brother, the writer Gilbert, dabbled in crime fiction) recognises a sandwich board man. I'm not sure the flashback method was the best way of telling the story, but it works moderately well, and the ending is downbeat and poignant.

The main story concerns two French identical twins, both played by Lom. They are the de Lisle brothers, a fearless pair of trapeze artists. Barney hires them and brings them over to Blackpool as a star turn in his circus. He hires the services of a rascally publicist, Mike Bergen (Terence de Marney) who has a glamorous girlfriend, Penny, played by Phyllis Dixey, whose real life story was interesting and rather sad.

It's a low budget film, but surprisingly effective in its moodiness and sense of things spiralling downwards and out of control. Very noir, in other words. Herbert Lom is excellent, and the supporting cast are also good. Recommended.

Herbert Lom was always one of my favourite character actors, and much more than his Pink Panther role. He was the moody and ominous Louis in 'The Ladykillers' (always wore his gangster fedora in role as during filming was also on stage in the West End every night as the king in The King And I - and had a shaved head to disguise.) Was also in a terrific pioneering tv series about criminal psychology in the Sixties called The Human Jungle - at the same time, I think, as contemporary Marius Goring was being a pioneering forensic scientist in The Expert. Lom was Czech, came to England to escape the Nazis and has a huge list of credits. He also wrote a book about Christopher Marlowe!

Thanks, Liz. I didn't know about the Marlowe book! I have a vague recall of The Human Jungle. I did watch The Expert, which I suspect came along a bit later. A very interesting actor.

The Human Jungle is available on DVD; copies of his Marlowe book are available, but rather expensive, sadly. Marlowe has always been a hero of mine, and my best friend played him in the RSC premier of a play about his suspicious death called The School OF Night some years ago. I always hope to discover a copy of Lom's book in a charity shop!.

I think The Human Jungle crops up on Talking Pictures, Liz