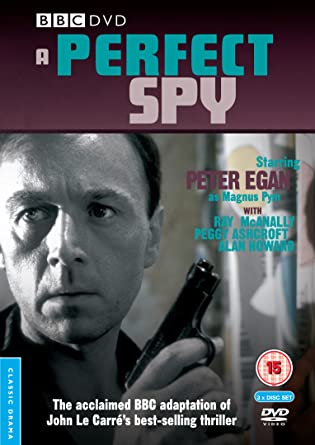 I missed the BBC TV version of John le Carre's A Perfect Spy when it was screened way back in 1987. The series had a strong pedigree, with a screenplay by Arthur Hopcraft, a very good writer who graduated from soccer journalism to high-calibre TV writing. The cast is strong, with one truly stand-out performance, but I must admit there were times when the seven episodes felt more like twenty-seven. Fast-paced it isn't. And for me, it isn't a patch on the TV version of The Night Manager.

The story begins in the present. People are waiting in a car to catch up with Magnus Pym. It's not clear what is going on. And then we go into an extended flashback that takes up almost the entirety of the seven episodes. We learn what has brought Magnus Pym (Peter Egan) to a quiet seaside town (I recognised Dawlish, which I enjoyed visiting for the first time back in September).

The key to Pym's life is his relationship with his father, Rick. Rick Pym is a con man, and it's no secret that the story fictionalises, in some respects, the relationship that le Carre had with his own very dodgy Dad. It's an interesting relationship, for sure, and links in closely with the theme of betrayal that is hammered home rather insistently in the script.

The difficulty for me stemmed, oddly enough, from the sheer brilliance of Ray McAnally's performance as Rick. He is a monster, but with a human side, and although McAnally was a fine actor, I doubt if he ever surpassed his interpretation of Rick Pym. Even Peter Egan,a very likeable actor in his own right, seems colourless in comparison. When McAnally was on screen, I was gripped. But at other times, the story was so unexciting and protracted that I found it difficult to care. Which I didn't expect.