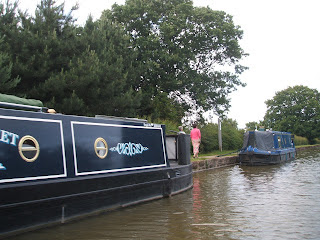 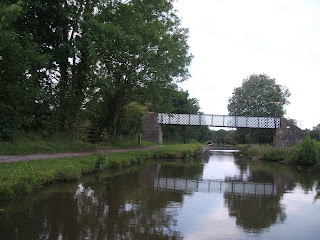 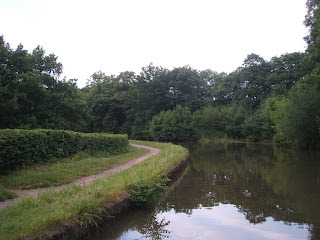 Cheshire is a county of many canals. I’ve always enjoyed drifting along on a barge, but I haven’t done it all that often. Last Saturday, though, was spent in a small party which took over a barge-restaurant for the evening, and we combined an excellent meal with a trip from Bollington, near Macclesfield, to a spot not far from Lyme Hall, where some of the celebrated scenes from the TV production of ‘Pride and Prejudice’ was filmed.

I enjoyed the trip so much that I resolved to do it more regularly. And the experience also reminded me of the few crime novels I’ve read where canals play an important part in the plot. Two stand out in my mind.

In Colin Dexter’s The Wench is Dead, Morse investigates an old crime while recuperating from illness in hospital. The framing device is strongly reminiscent of Josephine Tey’s, in The Daughter of Time, but Dexter used it very effectively, with Morse delving into a nineteenth century crime after becoming intrigued by a book about murder on the Oxford Canal. The novel went on to win the CWA Gold Dagger.

Coming right up to date, Deborah Crombie used the Cheshire canal network as an important background to her latest, Water Like a Stone. I was impressed by the way in which Crombie had researched the setting. You would never guess that she was an American writing about Britain.

As for myself, ten years ago I contributed a historical mystery to Maxim Jakubowski’s collection Past Poisons. ‘To Encourage the Others’ was a story about an execution, but the murder case in the story was based on a real-life crime which took place long ago in my home village of Lymm – on the Bridgewater Canal.

Digging into my fallible memory here, I think that one of Elizabeth George's books featured a canal boat in a significant way. If I've remembered correctly, the book is Playing for the Ashes (the one about a cricketer) and the person who lives on a canal boat is an animal rights activist.
Can't remember too many details, though. Elizabeth George, like Deborah Crombie, is an American who sets her books in the UK.

We lived on the Bridgewater Canal in Worsley in 1994-95. One of the nicest years of our lives. My husband lectured at the university of Salford. Lovely woods there too.

It's a very small world, Patti! As you may remember, Lymm isn't far at all from Worsley.