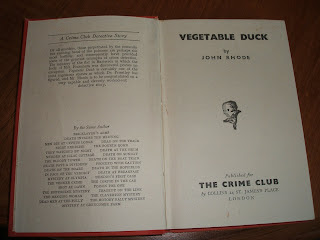 On a visit to a book fair the other day, I couldn’t resist buying a copy of Vegetable Duck, a detective novel by John Rhode whose title I became aware of through the Golden Age detection discussion group. 'Vegetable Duck' is also used as a pseudonym by Curt, an extremely knowledgable chap who shares my enthusiasm for the late Henry Wade and who is writing what sounds as though it will become the definitive study of Golden Age mysteries.

I haven’t read much by John Rhode, although I have to say that my current impression is that he wasn’t in the same league as Wade in terms of literary quality, innovative instinct or stylistic range. But he was very prolific and, interestingly, he remains very popular with some fans of Golden Age mysteries. A leading second hand bookseller told me recently that to buy all the Rhode books in first edition and dustjackets would be an impossible dream because, even if the books could be found, they would be unaffordable – rare Rhode titles are very expensive indeed.

I want somehow to find the time to read more Rhode, to get a better idea of the reasons for the fervent loyalty that he continues to attract, more than forty years after his death. Vegetable Duck strikes me as one of the most counter-intuitive of all titles for a crime novel, and I can’t help admiring the boldness of the author in choosing it.