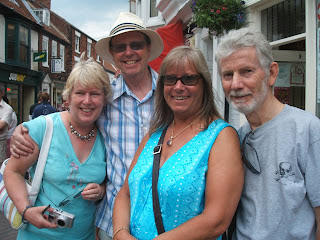 I first met Judith Cutler at a Christmas party in London, thrown by our then publishers Piatkus Books. I have a hazy recollection of a conversation with our editor, Kate Callaghan, just before she introduced us; she told me that I would definitely like Judith, and she was right. After we left Piatkus, she and I were later published by Hodder Headline and now we are both published by Allison & Busby. It’s quite strange that our writing careers should have run in parallel to such an extent. I have to say, though, that when it comes to novels, she has been rather more productive than me. Her latest, Still Waters, lists no fewer than 25 previous titles.

Judith is, then, a highly professional writer, but what is also interesting is the breadth of her range. She started with a likeable amateur protagonist called Sophie Rivers. These books drew on Judith’s experience of the academic world and her knowledge of Birmingham and the West Midlands. After that, she moved in the direction of the police procedural, with half a dozen novels featuring Kate Power (whose surname featured in each title.) Since then she has created two more series, featuring respectively Josie Welford and Chief Superintendent Frances Harman (Still Waters is a Frances Harman book.) She’s written stand-alones, historical fiction and romances. An impressive roster.

Judith spent a few years as Secretary to the Crime Writers’ Association, and a while back she married another friend of mine, Keith Miles – a former chairman of the CWA who also happens to be published by Allison & Busby; it’s a very small world. I took the picture of Judith and Keith (they are on the left, with Doreen and Stuart Pawson on the right) during a CWA weekend at Beverley two or three years ago. I’ll talk about Keith’s work in a future blog post, but Judith’s varied interests include growing organic vegetables – and cricket, a game for which she has enormous enthusiasm, and which occasionally features in her stories. Every now and then she writes a short story, and her work in this field deserves to be better known, including the memorable ‘Flying Pigs’, which she contributed to an anthology I edited back in 1999 called Missing Persons.

Flying pigs and cricket are two of my passions, so I must read these stories!