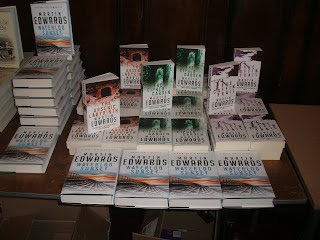 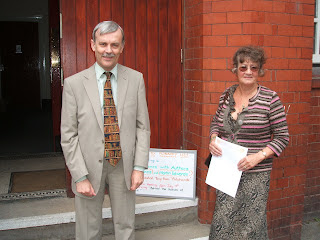 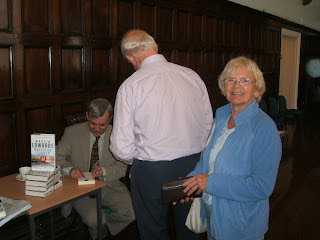 Yesterday I spent an hour in Formby (on the outskirts of Liverpool), along with June Francis, at an event organised by Pritchards Bookshops and the U3a. I’ve heard of U3a before, but never had any involvement with them. In a nutshell which probably doesn’t do them justice, U3a is an organisation which attracts a very large membership from people, usually over 50, who are no longer in full-time employment. Members evidently get up to a wide range of activities, including attending talks given by writers. And I was very impressed that they conjured up an audience of around 100 people for June and me.

June is a writer of romances and sagas. She and I have known each other for upwards of 15 years. At one time we were both published by Piatkus in hardback and Transworld in paperback. Now we are both published by Allison & Busby, so although we write in different genres, our careers have run along similar lines. And we’ve appeared at various events together over the years.

I had a surprise when a member of the audience introduced himself. Twenty years ago, he was a client and we were involved in several tribunal cases together. He reminded me that we never lost a case, and I couldn’t help feeling a sense of satisfaction that this was his memory of our working relationship (in fact, it was good that he remembered it at all, given that it was so long ago.) At the time, he never knew that I was an aspiring novelist, and it was strange but pleasant to encounter him after such a long gap and in such a very different environment. Yet another example of why it’s good to try to find the time, every now and then, to get out and meet readers and potential readers. The atmosphere at these events is always congenial. Which is more than you can say about the atmosphere at some employment tribunal hearings.

I think U3a is a great organisation. My old PhD supervisor is in it, which is how I first heard of it. Then, a collection of 3a physicists came to work and I participated in a series of seminars about modern publishing (I did the web 2.0 bit which is my metier, these days). The 3a-ers all asked good questions.
Something to look forward to, if I ever make it as far as retirement.

Maxine, I'm admitting my ignorance when I say I don't know what the web 2.0 bit is, so I'm hoping you'll enlighten me.
Yes, U3a struck me as full of potential for the future!

The web 2.0 bit is people like you and me, Martin! We are in the vanguard. You would be amazed at how many people have no clue it exists.
Another term for it is social web. It is a catch-all term for all the interactive things one can do with the web, eg blogging/commenting, networks, wikis, RSS feeds, etc.
"Web 1.0" is the "old fashioned" web, eg websites that are in effect broadcast media, with which the readers cannot interact but just have to read.

You might be amazed at how many of the world's leading scientists and science editors are unaware, or "have vaguely heard of" the social web, and remain ignorant of its immense potential.