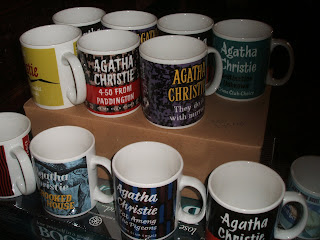 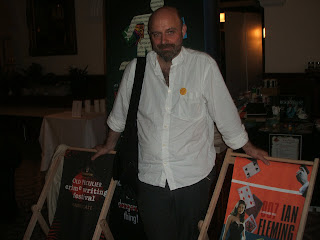 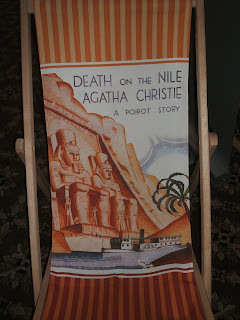 One of the many fascinating encounters I had at Harrogate was with Tony Davis, a designer who was displaying, in the foyer of the Crown Hotel, a variety of attractive, and sometimes witty and ingenious products with crime themes.

Tony Davis talked interestingly about his approach to design, and the connectivity of things. But even interesting theories are only as good as the results they produce, and I really liked what I saw of them. He’s made effective use of James Bond and Agatha Christie imagery.

Coffee mugs are obvious products for such images, but others are much less obvious - for example, I admired his deckchairs. One of those on display depicted the jacket artwork for the first edition of Death on the Nile. Another in the catalogue is – yes! – Evil under the Sun. Tony hadn’t heard of Milward Kennedy’s obscure Golden Age novel Death in a Deck Chair, the jacket artwork of which would again, I think, result in a wittily appropriate deck chair canvas. The real snag, of course, is finding weather this summer which is suitable for sitting out in a deck chair.

Surely the even more real snag would be persuading anyone to sit in (let alone purchase) a deckchair bearing the slogan 'Death in a Deck Chair'? Witty but highly INappropriate, I'd say!

But then again, maybe some people are more attracted to Living Dangerously than I am . . .

I wish I'd caught this guy at Harrogate. I bought this game at the Hay Festival this year. Not tried it out yet. It appears to operate on similar lines to Trivial Pursuit, but you can also bank books along the way, a bit like Monopoly. You can also concentrate on a particular genre when playing. Looks like good fun. I now need the right company...