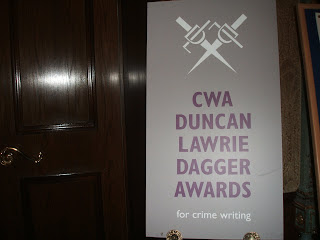 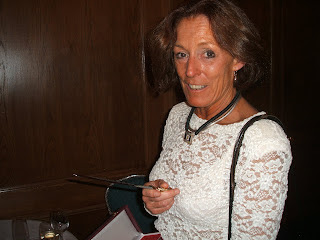 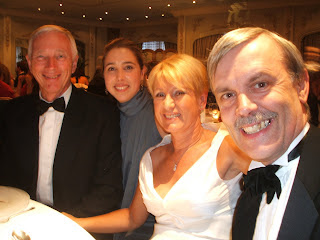 It’s been a truly memorable week, but Thursday was best of all. I spent much of the day at the new Wembley National Stadium – fascinating for a lifelong football fan – and called briefly at 221b Baker Street before sprinting across to the opulent Four Seasons Hotel in Park Lane. There will be more about Wembley and Sherlock’s home another day, but the main event was the Crime Writers’ Association's Dagger awards evening at the Four Seasons.

Over drinks before dinner, I had the pleasure of meeting fellow Allison & Busby novelist Elizabeth Corley and her husband Mike; our publicist Chiara Priorelli, had arranged for us all to be on the same table, and very good companions they were.

This was the fifth time I’ve been short-listed for a literary award, and so I’ve had plenty of practice in the art of managing my own expectations. Considering that the short-list included American best-sellers Michael Connelly and Laura Lippman, as well as former winners of the Short Story Dagger, Danuta Reah and Robert Barnard, it won’t strike anyone as surprising that I didn’t fancy my chances. So it came as a genuine thrill when Lesley Horton, chair of the CWA, opened the envelope and announced that I had won the award for best short story, for ‘The Bookbinder’s Apprentice’, which Maxim Jakubowski included in his latest The Mammoth Book of Best British Mysteries. An unforgettable moment.

I said a few words in a kind of daze, and enjoyed the rest of the presentations in an am-I-dreaming? sort of way. Everyone around was very generous and of course I enjoyed a few drinks after the ceremonial part of the evening was over. Among people I met for the first time was Mick Herron, who contributed a short story to the latest CWA anthology and, it turns out, works on the editorial team of an employment law update magazine that I read every week. I also had the chance of a chat with Frances Fyfield, who was justifiably ecstatic to have won the CWA Duncan Lawrie Dagger for best crime novel of the year. I’ve known Frances for a long time, and have enjoyed her writing since she began her career; her success is utterly deserved.

Well done Martin. I'll have to find the book

Many congratulations, Martin, on winning the Short Story Award. I loved the judge's summing up. "Subtle and insidious". Terrific!

Congratulations again, Martin! Is the story in book 6? (See my comment to your previous post.) Amazon does not list the contents and none of the series is in my local bookshop(s) (I've been out today to look.)

Thanks, everyone. The story is in The Mammoth Book of Best British Mysteries, published in March of this year. The series was previously published by Allison & Busby, but this year it moved to Constable & Robinson.

This is great info to know.