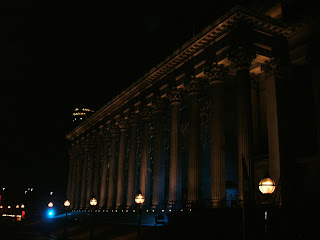 Charles Dickens was a regular visitor to St George's Hall in Liverpool (my photo really doesn't do the illuminated building sufficient justice), and gave many of his famous readings in the elegant surroundings of The Concert Room. Last night that same room was the venue for a truly memorable event, when I launched Dancing for the Hangman and we announced the winners of the Mace & Jones short story competition to celebrate Liverpool's year as European Capital of Culture.

There were about a hundred people in attendance, and the guest speaker was Phil Redmond. Phil is deputy chair of the Liverpool Culture Company, and famous for his work on television, including the creation of 'Brookside' and 'Hollyoaks'.

The winner of the competition, and £500, was locally based Cathy Roberts - who told me she lives in a boat moored at the Albert Dock. Entries came in from such far flung places as India and New Zealand, with a top 10 entry from Spain; the full list of winners can be found on the Mace & Jones website. Suffice to say that, as ever, it was very difficult picking the best stories.

Earlier in the day I'd been interviewed about the competition and the new book for Radio City by Duncan Bracks. The radio station operates from the top of the Beacon, which used to be a revolving restaurant when I first arrived in Liverpool in 1980 (I once had dinner there - literally a moving experience!) The view on a sunny day - and it was very bright yesterday - is quite spectacular. And you can just about make out the lights from the Beacon at night on the left side of the photo.
Posted by Martin Edwards

Is Cathy Roberts' story published somewhere? In a collection? It thrills me that there are awards for short story writing.

Nan, the story isn't published as yet, but I hope it will be, soon, and if so I aim to mention it on this blog.
While responding, can I also thank you for your very generous review of The Coffin Trail.