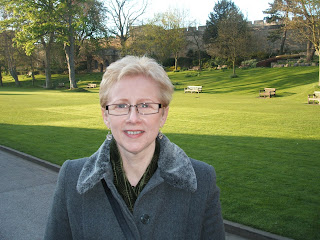 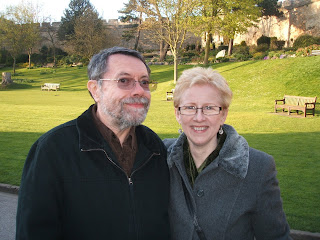 Immediately before our prison visit and reception, which I described yesterday, Margaret Murphy was voted in by the members of the Crime Writers’ Association as the CWA chair for the next twelve months. Margaret and her husband Murf weren’t able to attend the whole conference, because of other commitments, but it was great to catch up with them at Lincoln Castle.

The CWA couldn’t have made a better choice than Margaret. She is a very good writer, and (unlike many writers, including me) she is conspicuously, and consistently, efficient. I’ve known her for around 15 years – we first met through the CWA’s northern chapter meetings – and, helped by the fact that her home in Heswall is not too far away from my patch, I’ve had the good fortune to spend a lot of time with her in the intervening years. For a long time, Murf, Margaret and I regularly attended dinners together organised by another crime writing mate, Jim Parkinson, and these were always very enjoyable occasions.

Margaret founded Murder Squad, a ‘virtual collective’ of Northern crime writers, back in 2000, and she invited me to join, along with Ann Cleeves, Cath Staincliffe, John Baker, Chaz Brenchley and Stuart Pawson. The Squad experience has been great for all of us, and we’re meeting up again shortly, after too long a gap. Without Margaret, it would never have existed.

In these difficult economic times, an organisation like the CWA, as well as its members, is bound to come under financial pressure. But I’m sure Margaret will take it in the right direction. I only hope it doesn’t get in the way of the production of more of those splendid novels of hers.

Any news on Margaret's next book?

Not yet, but here's hoping for good news soon. It's a sign of the times that depresses me that such a good writer is not at present in print.