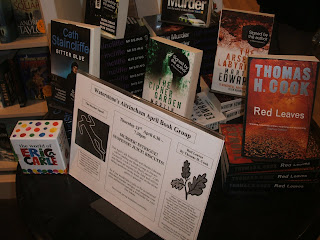 I’ve been having a very busy time since returning from Lincoln, and this week has included not only a good deal of work, but also two enjoyable events.

The first was an evening at the shiny new branch of Waterstones in Altrincham. Cath Staincliffe and I talked to a pleasingly large audience about our approach to writing, and specifically about Thomas H. Cook’s excellent novel of psychological suspense, Red Leaves. Cath and I are huge fans of the book, though interestingly, some of the readers’ group members in the audience disliked it, mainly because it was too bleak, although one plot hole was cited by Ayisha of Waterstones.

It was good to meet, for the first time, Paul Beech, who sometimes comments on this blog, Jennifer Palmer, who is organising a Mystery Women event which I shall participate in at Manchester’s Portico Library in July, and Caroline Shiach, the competition winner whose story appeared in the anthology Criminal Tendencies, which I mentioned recently.

The second event was another talk about the life and mishaps of Dr Crippen, this time hosted by Alison Russell and taking place at Runcorn Library. A smaller audience, but many questions and much discussion, so a very satisfactory session. The consensus of those attending was that Ethel Le Neve played a more prominent part in the death of Mrs Crippen than has been acknowledged.…

I heard that some interesting research has recently been done to suggest that Crippen was in fact innocent, on the basis that the so called 'body' discovered in the coal cellar was male. The suggestion was made that Mrs Crippen left her husband and returned to the US where she lived for many years under a different name.

Crippen's living descendants are now, apparently, petitioning for him to be pardoned because of this evidence.

Very difficult to prove anything at all though, so long after the fact!

I have just finished Dancing for the Hangman and found it fascinating. I wondered about Ethel playing a bigger part in it because of her apparent ability to keep secrets. From a female point of view I'm not sure I'd feel very comfortable if I thought a lover had murdered his wife unless I'd had a hand in it. So either she knew he was innocent or she played a part in the murder. Not a foolproof conclusion but it seems the case is far from being cut and dried.

Wish I'd known about Altrincham...

WhereDunnit, it's a fascinatng theory, and the tv show about it was repeated the other day. But I have to say I find it a 'solution' that raises many more questions than answers.

Jilly, I'm delighted you liked the book. I agree about Ethel. Her role in the story is intriguing.

Ah, Bookwitch, I should have put it on my Events page on the website, which badly needs updating. Hope you can make it to Crimefest.

Good to meet you too, Martin. I enjoyed the evening greatly and think it worked well with yourself and Cath Staincliffe able to build on each other’s comments and draw the audience out.

I was interested to hear how Cath found TV script writing compared with novel writing, and I look forward the publication of her novel about assisted suicide – a brave choice of subject! Of course there were moments of humour too, such as when you revealed why you’d found it necessary to hide the final chapter of The Serpent Pool!

I much enjoyed our initial chat as well, of course – to learn, for example, that you knew Robert Westall at Sir John Deane’s before he became the renowned author for young people, the first twice-winner of the Carnegie Medal for The Machine Gunners (1975) and The Scarecrows (1982). What a writer Bob was, with around 60 titles to his name including posthumous publications, and what a raconteur. I was fortunate enough to have some acquaintance with him in the mid-80s at the Davenham Antiques Centre, which he opened following his retirement from teaching. I will always remember him there, in his upstairs sale room surrounded by clocks, all ticking and whirring with merry musicality, a big man in every way with his mane of silver hair, thick-rimmed glasses and famous beard, spellbinding to listen to with ideas chasing opinions and anecdotes in that quirky, salty style (though sometimes with a wistful inward glance) as he sat polishing figurines with Brasso.

It was amusing to hear that Bob didn’t put you in for A-level art…wonder why!

Thanks for the other night, and thanks to Cath too – it was my birthday actually, and a real treat.

I agree with your view of Red Leaves. I think it is a truly exceptional novel - I enjoyed it immensely. On the basis of it I have read quite a lot of the author's other books, but not enjoyed them as much, apart from perhaps the one called something like the Murmering of Stones or the Murmering Stones, which sticks in the mind. The other books by T H Cook that I have read all have rather similar themes and structures. But Red Leaves is superb - readable, dark, exciting, insightful - very satisfying!

Maxine, have you read Breakheart Hill? I liked that one a lot too.
Paul - oddly, I knew Bob before he published a book. At the age of 11, when he first taught me Art, he was quite a scary character. And I'm afraid I never had the artistic skill to get to O Level, let alone A Level! I wish I'd got to know him in later life as you did.