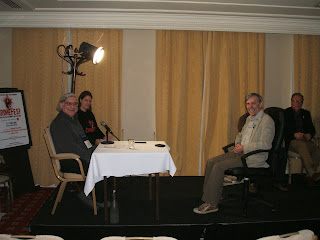 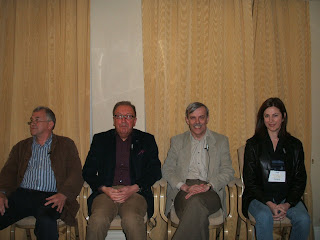 As a postscript to Crimefest, a few people have asked me how it felt to compete in the Mastermind quiz, in that leather chair made famous by the TV programme, with lights dimmed, except for one very bright one, shone right into the contestant’s face. The short answer is that it is a bit like doing an exam, with the added frisson of making a fool of yourself in front of various friends and readers. The consolation was that Simon Brett, Meg Gardiner and David Stuart Davies were in the same boat, and very good-natured fellow sufferers they were.

The setting was certainly intimidating, as with the TV show. The Crimefest organisers did a good job of replicating the menacing atmosphere, and Maxim Jakubowski is a seasoned - and both authoritative and fair-minded - interrogator. In fact, the very first time I met him was as long ago as 1990, when he organised a similar event for the London Bouchercon, in which I participated (and thereby met some fascinating people, including Geoff Bradley, editor of that great fanzine CADS.) Maxim repeated the quiz at the 1995 Bouchercon in Nottingham, with panellists including the late Edward D. Hoch and US crime expert Marv Lachman, and me.

So I did have some past experience of what it feels like to expose my ignorance, as well as my fund of criminal trivia, to a crowd of curious onlookers. As one friend said to me: ‘How could you possibly have forgotten the first name of Marcus Didius Falco’s beloved? It’s the same as your wife’s….’

I would be a mess in that situation but I'm glad you had fun.

All the contestents did superbly, I thought. Even if I had that level of knowledge, I'm sure my mind would have emptied as soon as Maxim opened his mouth! And I think you were a little hard-done-by to receive only a single point for naming all the past presidents of the Detection Club!

I have an new email system and lost your email regarding a forgotten non-fiction book but it sounded great. See you then. And thanks as always.

I wouldn't feel too bad. After all, we all can come up with game show answers in our living rooms, but when you're actually a contestant under the spotlight, it's not exactly the same environment.

Hi Michael, I think the smart thing would have been to pass on that question, since the answer took so long to give!
Thanks Elizabeth, and welcome. I've added your blog to the blogroll.

You are a good sport even to have participated. I am absolutely terrible at those kind of 'on the spot' contests.