The Cipher Garden and Amazon 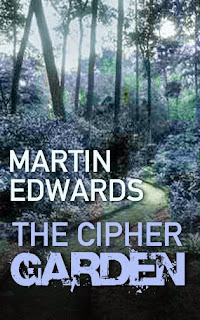 I’ve received glad tidings from Allison & Busby, namely that The Cipher Garden is to be reprinted shortly, with new cover artwork in the same style as that for The Serpent Pool and the recent reprint of The Coffin Trail. An early version is illustrated above, although there may be a few changes before it is finalised.

This is pleasing news, because one of the unfortunate aspects of life as a published writer – if you are lucky enough to hang around for a few years, and produce a number of books – is that it’s all too easy for your work to slip out of print. This can be frustrating for several reasons. In my own case, I do find that people attending talks I give are sometimes keen to buy the early Harry Devlin books, and I don’t have that many of my own stockpile of copies left!

Yet the truth is that I was relatively lucky. The Devlin series did have a second life – after the books first came out, Hodder reprinted the early titles in the late 90s, as well as publishing the sixth and seventh entries in the series – but even that came to an end. As a result, when I wrote Waterloo Sunset, I was quite careful to make sure that someone could read it without any previous knowledge of the Devlin saga. And at least Waterloo Sunset – a book I enjoyed writing enormously - remains readily obtainable.

As for The Cipher Garden, I wonder if the fact that it’s been quite extensively (and positively, thank goodness!) reviewed on Amazon is a factor in its continuing sales and longevity. I guess that it may be. Whatever people may think about Amazon reviews, they do influence buyers, with five-star reviews clearly pretty important, and I’m certainly very grateful to those who have reviewed this and others of my books kindly on Amazon. One quite prominent writer recently told me of his dismay about negative reviews on Amazon of his latest book, and this rather sad story illustrates, I think, the impact of Amazon reviews on writer morale as well as on sales.

Martin - Good news about The Cipher Garden. It really is an excellent book. You make such an interesting point, too, about Amazon reviews. I think they do influence buyers, regardless of who's doing the reviews. Sobering thought, really...

Great cover! I'm excited you're getting a reprint.

I think Amazon does function as a tool for readers. One concern is that these aren't usually seasoned reviewers...I've seen, unfortunately, *plenty* of reviews where the critique was colored by Amazon's delivery time of the book to the reader's home!

Great news and well deserved.
As I said on Facebook, I had to buy the first 4 Devlin books used.
This obviously nets you no money but that is the dilemma of the reader. I know it seems like begging, but have you considered using PayPal as a donation tool???
Put a button next to the out of print books and say if you have bought this used would you care to donate???
I know I would.
I will go to Amazon and 5 star what I have read so far.
I'll try a review but I'm no writer.
I really do enjoy your books , Martin.
Keep up the great work.

I love the new cover! I think it's a wonderful book and I'm starting chapter six of The Serpent Pool. I must say, the scene in the boat at the beginning was one of the most fascinating and disturbing scenes I've ever read! But, I love those types of scenes. I can't wait until Hannah and Daniel meet again!

Margot, Elizabeth, many thanks. Sobering is right, Margot!

Alistair, I've never thought of the Paypal donation idea, but will certainly mull it over.
Thanks very much indeed for your reaction to the books, which I really do appreciate.

Reviews on amazon: interesting subject. Maybe worth a little investigation (anything to postpone actual writing). I've left a few reviews on Amazon.co.uk. I wrote an unfavourable note about a Stephen Fry novel - I forget which - within an hour, dozens of reviews reading more like adoring exegeses had pushed my review from view. Does manipulation by review happen on Amazon?

Very interesting question, Gary, though I must admit I have no idea what the answer is.

Having had a few reviews published at sfreader.com as well as writing them on my blog, it's almost a shock to be reminded that some of those authors whose hard work I may sometimes have been less than favourable about may actually read them! I suppose the whole idea of reviews is to influence the reader/buyer, and on amazon of course it's there at point of sale and very easy for anyone to dash off in a moment of temper (coloured, as Elizabeth said, by the whole amazon process). Quite a worrying thought.

Hi thousandmonkeys, as a reviewer myself, I know what you mean. Always important to be fair-minded about reviews, but understandably, writers tend to be sensitive souls. None of us loves negative reviews, I guess, but none of us can avoid them altogether.