The Theatre by the Lake 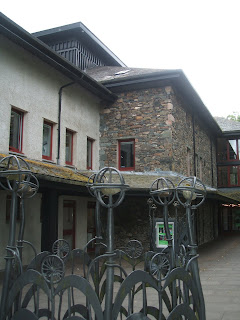 A highlight of my trip to the Lake District was a backstage tour of a truly fascinating place, the Theatre by the Lake at Keswick. There can be few theatres anywhere in the world that enjoy a lovelier setting, overlooking Derwent Water, and the building – opened eleven years ago - has been very sympathetically integrated into the landscape.

One of the many pleasant things that has happened to me as a result of writing this blog is that, after I mentioned the Theatre following my last visit to Keswick, in the autumn, I got into contact with David Ward, literary consultant to the Theatre, and a Cheshire based former journalist. David has written a history of the Theatre which I found really interesting. It’s a story of a collective and community effort to create something truly worthwhile, in the face of many obstacles. It’s great that the story had a happy ending. Audiences and reviews have been exceptional, consistently. I would love to watch a production there, and when time permits, I plan to do so.

I am interested in featuring the Theatre in either my current work in progress or a future book, or perhaps both. It’s such an intriguing place, and one whose existence deserves to be very widely known. I’ve been encouraged by David’s reaction to the suggestion, and he was kind enough to arrange for a colleague, Rachel Swift, to organise an enthralling tour. Over the years, I've been lucky enough to look behind the scenes at many remarkable places, including Wembley, Harrods, Chester Zoo and Liverpool's Conservation Centre, and this was another memorable outing

Because the Theatre is such a modern place, it’s not at all like something out of Phantom of the Opera. Nevertheless, the atmosphere of the props room (which among many other artefacts boasted a fake skeleton) was compelling. Could it be a scene for an incident in a mystery novel? Very possibly....

Labels: Keswick, Theatre by the Lake

That theater looks so beautiful.

Can I just say something? I am so in love with the Serpent Pool. I love that Daniel called Hannah when his sister had trouble. I love that Marc found the message on her mobile. I just can't wait to read the book every night before bed. I read three chapter a night at least.

Martin - It sounds like that theatre is really a beautiful place - full of character and history. I'd love to see it, and I hope you do feature it in your work.

Thanks, Clarissa. I'm really pleased that you are enjoying the book. The first part of it was hard to write, but once I was half way through, it all seemed to come together.

Margot, I hope you get the chance to visit the theatre. It really does have a unique appeal.

Gorgeous picture. It definitely looks like a setting that needs inclusion in a book!