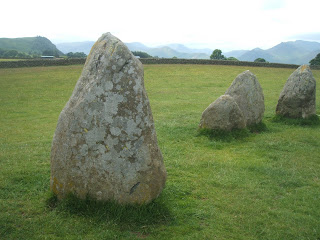 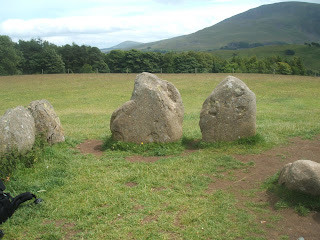 There is something fascinating about ancient stone circles. One has a sense of timelessness, of sharing with people long gone and forgotten. And yesterday I visited, for the first time in more than twenty years, a stone circle in a quite lovely setting. This was Castlerigg, on the outskirts of Keswick.

I decided to celebrate my birthday by having a day’s holiday from work – and where better to spend it than in the Lakes? After the recent fine weather, the day began with drizzle, but – untypically, it has to be said – the weather improved the closer we came to the Lake District. The first stop was Windermere, a town I’ve always liked, and the second was Castlerigg.

The stone circle at Castlerigg isn’t exactly Stonehenge, but it’s quite notable and well visited. It dates back 4,500 years, which is quite a thought. I find it impossible to resist imagining what it was like all that time ago, and what mysterious rites took place in the circle, and around the gathering of stones known as the Sanctuary. The landscape of the Lakes has no doubt changed a lot in the interim – human beings have had a massive impact on it, an impact that isn’t always obvious. But I’m sure it was gorgeous 4,500 years ago, as it is today.

I’m not sure if I’m going to feature Castlerigg in either my work in progress or a future novel. I’m conscious that Stephen Booth, in his Peak District series, had a novel that featured a stone circle, Dancing with the Virgins, and I think both he and I are keen to avoid utilising similar material, though of course so much depends on how that material is presented. P.D. James featured a stone circle, for instance, in The Private Patient. One thing is for sure, a stone circle makes for a very evocative setting, and does have the potential to provide a great scene in a mystery, as well as for a stop on a day trip.

I find stone circles and their history extraordinary.

Martin - Thanks for sharing these lovely 'photos! I've always enjoyed stone circles, too. I'm glad you took the time to enjoy yourself.

What an interesting post. I really love crime novels set around archaeological sites, e.g. Stephen Booth´s. The archaelogical aspects are also a great part of the attraction of Elly Griffith´s novels, The Crossing Places and The Janus Stone (which Maxine was kind enough to send me when she had reviewed them).

And now you have made me even more curious to read The Private Patient which is on my shelf.

Stone circles does tend to make you ponder why, who and what. Hope you had a great birthday.

I love stone circles and standing stones. Last year my wife and I visited Avebury, and, while a portal to the past didn't open when we entered because we are descendants of Druid priests as I had hoped, it was still amazing.

Martin – many happy returns of yesterday! Didn’t realise you shared a birthday with my granddaughter Megan – just 44 years between you!

Your Castlerigg pics are quite atmospheric in a way. But with ancient sites like this, nothing compares with quiet time spent on the spot, does it? That sense of awe that steals over you, that sense of connection with the past. It’s an odd feeling, almost as if the current of distant times is flowing through your system. A feeling I experienced strongly myself on Tuesday evening, wandering alone amongst the ruins of Basingwerk Abbey in the Greenfield Valley Heritage Park outside Holywell – do you know it? The cries of the jackdaws seemed to fade away as I lost myself in the world of the 12th and 13th century Cistercian monks, who kept sheep and ran a water-powered corn mill.

I understand your caution over using stone circles in a novel with Stephen Booth having got in first. Still, it would be a shame to deny Daniel and Hannah so evocative a locale as Castlerigg, wouldn’t it? I’m sure your treatment of stone circles would be as different from Stephen’s as your ‘Dancing for the Hangman’ is different from John Boyne’s ‘Crippen’.

Anyway, glad you had a nice day, Martin – Megan did too!

Me, too. I swear this is an aura around them.

Many thanks for your comments.
David - 39? I wish!
Dorte - I know Stephen's books very well, but haven't read Elly Griffiths yet.
Paul, yes, I like Basingwerk, though it's ages since I've been there.

Natalie~Coffee and a Book Chick said...

I've stumbled across your blog and am happier for it -- I enjoyed this post and look forward to more!

I hope that ´yet´ means you plan to - her first book is one of the most convincing crime debuts I have read for years. And an interesting, likeable protagonist who is a forensic archaeologist should be difficult for you to resist (as far as I know you).

Dorte, I find I do have one in my massive TBR pile!

Greetings, Coffee and a Book Chick - thanks for visiting, and I hope to hear from you in the future.

Belated best wishes, Martin - many happy returns!
Castlerigg is a magically beautiful spot: much more dramatic setting than stonehenge or Avebury. Speaking of the latter, Jenni Mills's second novel (perhaps more a mystery than a straight crime novel) has a plot centring on the Avebury ring(s) & their history.
But that's not a huge crowd, surely there's room for another?