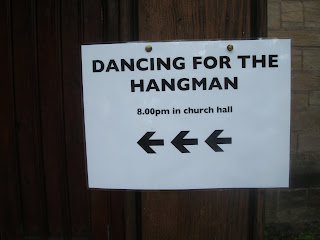 Public speaking is something I’ve done often over the years, yet I’m far from being a ‘natural’. I spend my youth dreading and therefore avoiding it, and when I became a solicitor, I coped with advocacy (in less formal employment tribunals rather than conventional courts) by treating each case as a battle to be won. I started lecturing on legal topics in my 20s, but found this hard going, and I still try to dodge it when I can.

When my first novel was published, I found my first ever radio interview to be quite an ordeal. But over the years, I gained a lot of practice in talking about my writing, and I became more confident. I also found it easier to talk about crime fiction than, say, legal issues, because crime fiction is what I love. Attending crime conventions and participating in panels also helped to build my confidence.

Since publishing Dancing for the Hangman, I’ve given my talk about Dr Crippen several times. Each time it’s a little different, because I talk without notes and consequently change it a bit every time, varying the parts of the story on which I focus. Last night was different again, because I gave the talk as part of the Lymm Festival, and members of the audience included quite a number of people who know me as a neighbour rather than a writer. And, of course, you don’t want to make a fool of yourself in front of people you might bump into any day.

Fortunately, there was a good audience, with lots of questions, and the atmosphere was very positive, with plenty of books sold at the end of the evening. I really enjoyed sharing my enthusiasm for a story which really is stranger than fiction. The Crippen mystery is endlessly fascinating, and the Lymm Festival-goers seemed to think so too.

Martin - I know just what you mean about getting better at public speaking as one gets more experience at it. I've taught for so long that I'm quite accustomed to public speaking. I still get nervous sometimes, though.. I'll bet your Crippen presentation's quite interesting.

Martin – Great to see you again last night, and nice to meet your wife too. Your talk was absolutely brilliant. You were so completely the master of your subject, your delivery so compelling, that you held us spellbound.

The Crippen case is indeed endlessly fascinating. What came over clearly from your talk was what a nice little chap the doctor was, mild mannered, charming, kind, with everyone involved, including Chief Inspector Dew and the prosecution witnesses, confirming this. He wouldn’t have harmed a fly, so how could he possibly have done away with his wife and mutilated her remains?

Fascinating, too, the Edwardian period colour – the Chief Inspector taking his suspect out to lunch; the trial judge inviting an actress to sit beside him on the bench; the piece of flesh in a soup bowl passed around the jury for inspection; the penchant for adopting false names, with Hawley Harvey becoming known as Peter, Kunigunde as Cora then Belle, etc.

Of course we all had a laugh over Ethel’s teeth, the absurdity of her having them all removed on Hawley’s recommendation as a cure for catarrh, then their romance blossoming despite or because of this!

Great Q&A session and an amusing revelation from you when asked whether you’d liked to have been a detective. No, not brave enough. But aged six at school you’d said you’d like to be a detective when you grew up, but it would have to be in America where they carry guns!

It was a thoroughly enjoyable evening, Martin, and I’m very pleased to have added signed copies of ‘The Serpent Pool’ and ‘Waterloo Sunset’ to my TBRS (To Be Read SOON) pile!

Martin, I think you are right: the Crippen case is fascinating.

By the way: thanks for your very good book about the case which I enjoyed quite a lot.

Martin's Crippen presentation would be a real bonus at the next year's Crime Fest?

Thanks very much for your comments.
Paul, it was great to meet you again. I'm so glad you enjoyed the evening.
Morgenlander, thanks - I'm delighted you liked the book.
Uriah, if asked, I'd be glad to do it!