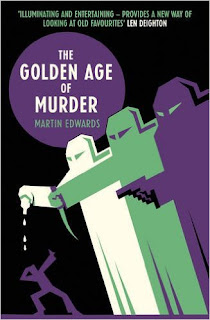 I'd like to wish all readers of my blog and my books a very happy - and healthy - 2016. Let's hope it's a year when good things far outweigh the bad. To get myself in the right sort of mood, I've already typed "Chapter One " today - the chapter heading rather than the whole chapter, I hasten to add! As well as managing to start the year without the faintest hint of a hangover, I've also been delighted to find The Golden Age of Murder named as book of the year on the widely read Random Jottings blog.

After a flurry of brand new books in 2015, this year will be slightly quieter for me - but the key word there is "slightly". I'm already looking forward to paperback publication of a revised edition of The Golden Age of Murder (a first draft of the proposed cover is above) and of The Dungeon House.  I'm also hoping for an ebook publication of a new collection of my short stories, but this has yet to be finalised.


I'm now working on a couple of new books, but neither of these will achieve publication in 2016. However, I have also signed up with the British Library to compile no fewer than six new anthologies of classic crime stories, and three of these will appear this year. The first two will be Murder at the Manor - country house mysteries - and Serpents in Eden - countryside crimes. The third will be announced later n the year. .I've also reached agreement in principle for the British Library to publish something which, although short, is unusual and in the Golden Age vein- and, for me, rather exciting and unique. The details are being finalised, and I hope to say more about this before long.

Harper Collins will publish The Sinking Admiral by "certain members of the Detection Club", including me. This collaborative novel, supervised by Simon Brett, has proved very enjoyable to create and it will also give a welcome boost to the Club's coffers. There may also be a further Detection Club project later in the year, if all goes according to plan.

I've already written intros for a host of new entries in the British Library Crime Classics series, and there are some very good books to look our for. There will also be a reissue in the Collins Detective Story Club of an old Edgar Wallace for which I've written an intro.

I'm hoping that this year will see the publication of Taking Detective Stories Seriously, the collected Sunday Times crime reviews of Dorothy L. Sayers, for which I've written a detailed commentary. The Dorothy L. Sayers Society is publishing this, and I must say the reviews are a mine of information. They are also very enjoyably written.

It's going to be a busy year in terms of festivals - Crimefest, Malice Domestic, St Hilda's, The Bodies in the Library, Deal Noir, Essex Book Festival and Felixstowe Book Festival are already in the diary. I hope very much to meet some of you at one or another of those events. Last year, this blog sailed past the million pageview milestone, and your comments and emails continue to give me enormous pleasure - I'm truly grateful for your support. Writing is satisfying in itself, even if what one writes never sees the light of day, but there's something special about writing something that appeals to discerning readers.

Looking forward to all of these! Happy New Year!

Here's for you having a wonderful and prosperouos 2016, Martin!

To celebrate the new year, I'm reading a wonderful and fascinating book about the Detection Club and the golden age of murder. Can't remember the name of the author, though.

All the best for the new year to you and yours, Martin. Heading in to Waterstones with "The Golden Age of Murder" belatedly at the top of my "must buy" list.

What an exciting year ahead! And what an enjoyable book The Golden Age of Murder was; I pressed it on several people.

I've been meaning to ask, because I now can't remember if it was mentioned in your book, whether you've read Denis Mackail's The Majestic Mystery? I listened to an audio version and it's very entertaining, if not entirely ingenious in its plotting.

Thanks very much for these kind comments. Jerry, Bill, hope you enjoy the book! Simon, I haven't read anything by Mackail, but I'm interested in your recommendation. I'll look out for it.

I'm very pleased to hear of the new anthologies. I have two of the ones you've edited previously, and though I'm not as big a fan of Reggie Fortune as you are, they were both excellent. I love short stories and can't wait.

Many thanks, Graham. With Reggie, I'd be the first to agree that one has to be highly selective. Bailey is certainly an acquired taste, but at his best he is excellent.