Bodies from the Library 2019 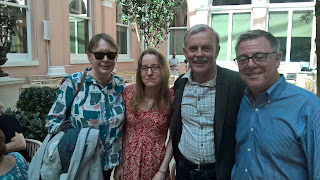 I doubt I was the only person who was surprised to be reminded that Saturday's Bodies from the Library conference was the fifth to be held. What a five years it has been for lovers of classic crime fiction! How vividly I still recall my first chat over coffee with Rob Davies (a welcome attendee on  Saturday, even though he has now left the BL) and his suggestion that I write a couple of intros for forthcoming novels by John Bude, as well as my telling him that I was just about to conclude work on a manuscript about "the golden age of murder".....

The programme for the day was packed but well-organised and as ever I'd like to congratulate all those who worked so hard to make the day a success. I was on a flying visit to London, but Moira Redmond of the Clothes in Books blog had invited me to join a small gathering for tea at the Wallace Collection, and this proved a convivial occasion, at which I had the pleasure of meeting Brad Friedman, a blogger based in San Francisco, who was over in the UK for a few days. (Moira took the photo above, of Christine Poulson, Kate Jackson, Brad and me). We even did a bit of book shopping in Charing Cross Road before heading over to Euston for a meal with the Bodies team, David Brawn of HarperCollins, and a number of other friends.

Because it's such a busy day, there's never as much time to socialise as would be ideal, but it was good to see the likes of Nigel Moss, Barry Pike, and Geoff Bradley during the breaks. I enjoyed listening to the various talks, including one by Sarah Ward about E.C.R. Lorac which was very timely given that earlier in the week I'd been on a trip to Lorac's country - about which, more another day.

There was a live performance of "Sweet Death", a radio play by Christianna Brand, which worked very well, and I was interested to learn more about June Wright, an author about whom I knew nothing, from Kate Jackson. I was interviewed by Christine Poulson about Cyril Hare, and there was also an enjoyable session at the end of the day when the speakers answered questions posed by audience members. Great fun.

It was, as always, a wonderful occasion - organised so brilliantly that it appeared effortless and all credit and a huge thank you to everyone involved. It's interesting to discover so much about so many who are now read by so (relatively) few, although personally I despair of living long enough to fill the enormous hole in my knowledge. The radio play was brilliant, and a bouquet to the excellent cast - I assume from a dramatic society? I am already looking forward to next year's event (and hope there isn't a repeat of the signal failure that left me stranded at a very warm Waterloo Station for some considerable time - but at least I had plenty to read!)

Yes a brilliant day the first I have been able to attend. Yes being stuck at Waterloo was a shame and then again at a red signal in the New Forest which we ran with permission. I wish the guard had not been so forthcoming. I am sure there is a story there somewhere. How many deaths in the Golden Age on or by trains have there been I wonder?

Fiona and Vicki - great to see you both and commiserations about the train journey!

Was a great event Martin - I enjoyed every minute of the whole weekend!