Forgotten Book - It Walks by Night 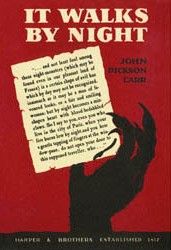 1930 was an important year for the detective novel. Among much else, it saw Jane Marple's first appearance in a novel, and the beginning of the relationship between Lord Peter Wimsey and Harriet Vane in Strong Poison. This was also the year when a young American detective novelist, aged just 23, published his first book. The novel was called It Walks by Night, and his name was John Dickson Carr.

Actually, his original title for the novel was With Blood Defiled - a good job he changed it, I'd say! The story was an expansion of a novella, "Grand Guignol", which he'd published in his college magazine, The Haverfordian. There is an excellent account of the genesis of Carr's writing in Douglas Greene's marvellous biography of him.

It Walks by Night is set in Paris, and it brims with macabre atmospherics. It's a young man's book, definitely, and he would go on to write finer mysteries, but it's absolutely full of interest. And, of course, it boasts an impossible crime - the inexplicable beheading of Duc de Savigny. A case for Henri Bencolin to investigate, narrated by his Watson-like American friend Jeff Marle.

The late Bob Adey was a Carr fan, and I was thrilled to acquire from his estate the American first edition of this book (no jacket, but never mind), complete with an inscription from Carr about water flowing "over the matrimonial bridge". You can see in the book traces of the opened seal - a marketing gimmick from the publishers, Harper, who sealed the last third of the novel, and offered purchasers their money back if they returned the book with the seal unopened. I bet there are few copies with the seal unbroken...

Anyway, the good news is that the British Library is bringing this landmark title back into print, and there will be a bonus extra in the Crime Classics edition - the inclusion of a short story featuring Bencolin called "The Shadow of the Goat". I'm looking forward to its reappearance on the shelves.

You have intrigued me with both this novel and the biography! By the way, speaking of sealed pages, not very long ago I got to the end of one of the mysteries praised by Sayers in her 1930s reviews, and the edition in my hands was indeed very old, and to my unspeakable astonishment discovered that the two very last pages had never been cut apart! Whoever and however many people had read this copy over the past 40-50 years had never bothered to notice they didn’t actually read it to the end! I wish I could remember which book it was. I meant to but forgot.

That’s fantastic news Martin! Precisely a year ago, at the Captivating Criminality Conference in Bath, I presented a paper on JDC asking desperately for the reprinting of one of his books here in the UK. I may have polemicized a little bit, but I am convinced that there has never been someone like him in the long history of detective writing. I’m glad this is going to happen. Thank you!

I read with interest your comment about JDC changing the title of his first novel as it recalled to mind a simple oversight I made recently when looking on Amazon for JDC novels I hadn’t read before. I duly ordered ‘The Black Spectacles’ only to realise after the first few chapters that I had already read this story under the title ‘The Problem of the Green Capsule’. No matter, I didn’t remember who the perpetrator was and enjoyed it just as much second time. Whilst writing, I would just like to say ‘thank you’ to you, Martin, for giving me the encouragement to continue with my own writing when you gave a talk at my home town of Woking last November. I’m pleased to say I became a published author on New Year’s Day and have since had a few more short stories published. Small beer but it’s a start!

Glad you are pleased, Stefano. I would love to see your paper on JDC.