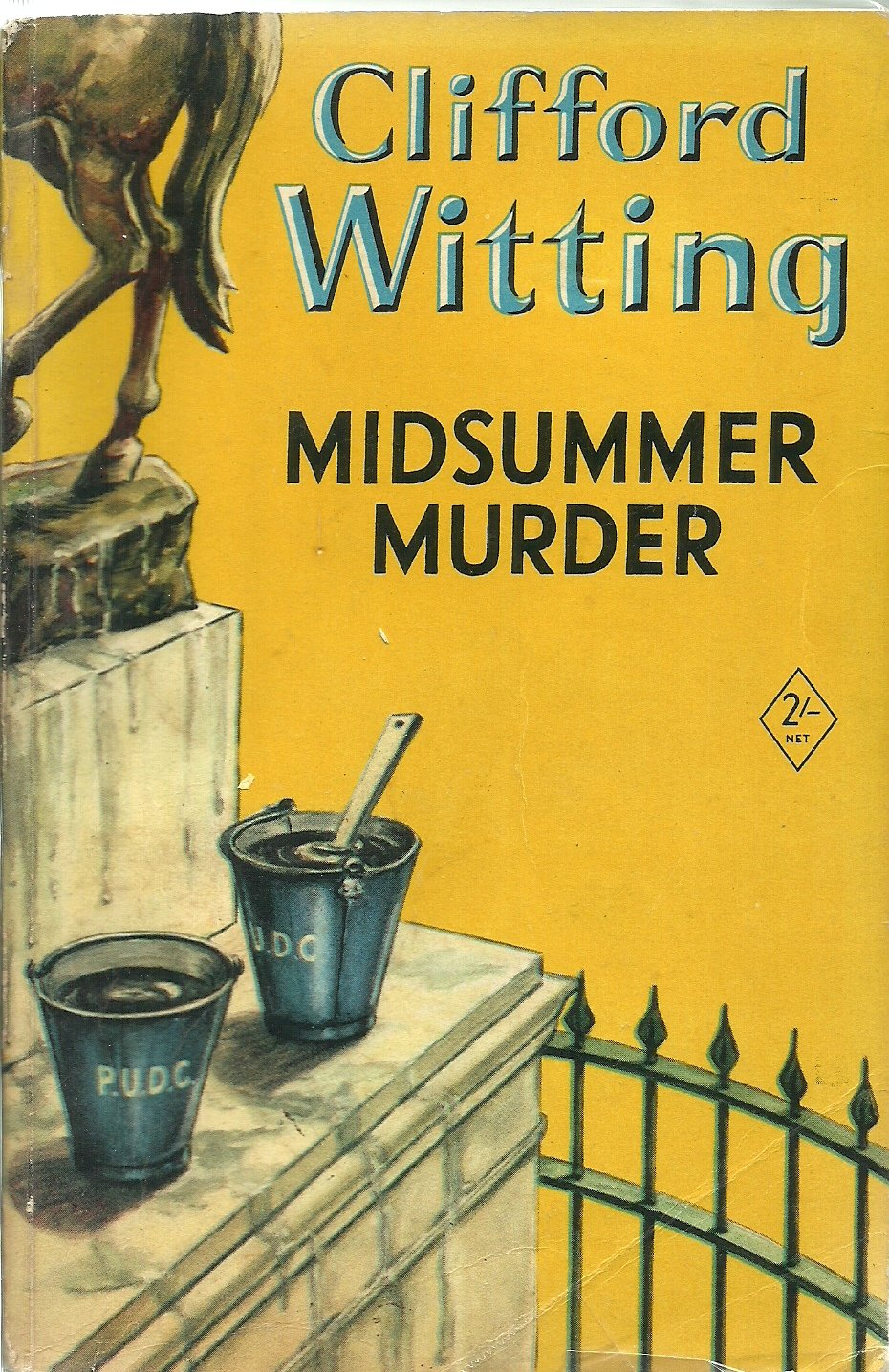 I've read a couple of books by Clifford Witting, which I'd rank as very competent Golden Age stories, towards the top end of the second division. And now I've devoured Midsummer Murder, his second novel, which I found extremely enjoyable. It's a story about a series of sniper killings in a small town, and it comes complete with map of the crime scene and an ironic reference to the Detection Club in the very last sentence.

Witting was a witty writer, and occasionally he overdoes the facetiousness. There's also a bit too much authorial  intervention for modern tastes (although that amusing final sentence makes up for it, in my opinion). But I'd say that he is a writer whose work is likely to appeal to anyone who is a fan of George Bellairs. And on the basis of what I've read, I'd add that he's the superior crime novelist. Indeed, twenty years after his jokey reference to the Detection Club, he was elected to become a member.

The story begins, I was pleased to note, on my birthday, in July, in the tranquil setting of Paulsfield, soon to be tranquil  no more. A workman is shot while cleaning a statue in the town square, an extraordinary crime which is apparently motiveless. For a long time I wondered if we were looking at a riff on The ABC Murders. I don't think it's a spoiler to say that this is not a book of that kind, and although (I choose my words with care) some readers will quibble about the slenderness of the connecting link between the deaths that plague Paulsfield, that didn't spoil my enjoyment.

Indeed, a great pleasure of this book is the characterisation, which is consistently amusing and appealing. Among the cast is a widow whose voluminous card index system contains masses of information about the local inhabitants. Inspector Charlton and Sergeant Martin make a likeable investigating duo, and although the book is perhaps a little longer than it needed to be, it held my interest from start to finish. Recommended.
Posted by Martin Edwards

After reading a couple of Witting books - There Was A Crooked Man and Dead On Time - I’m keen to read more. Any chance the BL can have a go at the more obscure ones?

I have a copy of a much loved children's book by Witting, The Knights of St Perrins, about a group of boys (mid-teens) left at their boarding school over the summer holidays: a sort of modern (sic - published 1948 I think) Stalky and Co. It's a great yarn, involving a bunch of crooks and a mysterious "King Arthur"...I still enjoy it

I've just had a look on Abebooks and the cheapest copy of "Midsummer Murders" on the site is £750!

Hello Puzzle Doctor. I've read three by CW now. All good, but Midsummer Murder appealed to me the most. With the BL, you never know. I'd like to think so, but they wouldn't publish the obscure ones simply because of that obscurity. A number of things have to work out, including availability of the rights.

Thanks, Jonathan. My copy is a mere paperback. Mind you, it is signed by Witting, which is a bonus.

CW is one of my favourite authors, I have 14 and am always on the lookout for the missing ones. Sadly, they are hard to find and can be very expensive.

Thanks; he certainly deserves to be better known.