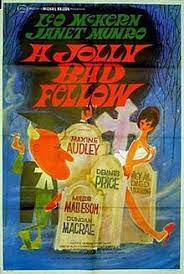 C.E. Vulliamy wrote his crime fiction in two phases. First came the Anthony Rolls books in the Golden Age - two of them have appeared as British Library Crime Classics. And then, for a dozen years from 1952, he wrote a further set of novels. Francis Iles was, I think, his principal inspiration, but his writing had a distinct flavour of its own.

That 1952 novel was Don Among the Dead Men. Twelve years after it appeared it was made into a film with an equally punning title, A Jolly Bad Fellow. It's a black comedy directed by the accomplished Don Chaffey, and although it wasn't a box office success, it still remains very watchable today, because of the range of talents which contributed to its making, not least the principal scriptwriter, Robert Hamer, who is best remembered for the wonderful Kind Hearts and Coronets. The jaunty soundtrack was written by the great John Barry. And the cast is terrific.

The setting is an august university, Ockham. Professor Bowles-Ottery (Leo McKern) is a chemistry don with a taste for publicity that irritates his collegues. Conversely, their prudishness irritates him. He's married to an actress (Maxine Audley) and has an extremely glamorous lab assistant called Delia (Janet Munro). Whilst working in the lab alongside a junior assistant (Dinsdale Landen) he comes across a poison which causes lab mice to dance manically before expiring. Soon he is putting the poison to work as a means of disposing of people who make a nuisance of themselves, while embarking on a dangerous dalliance with Delia.

Long before his days as Rumpole, McKern gives a performance of great verve. Incidentally, I was sorry when I researched the cast to discover that Janet Munro died, after a period of alcoholism, at the age of 38. She was well-known for her exceptional good looks, but like her rival in this film Maxine Audley, she had a compelling screen presence and a great deal of acting ability.

And Cliff Michelmore , the TV interviewer!

A galaxy of talent!