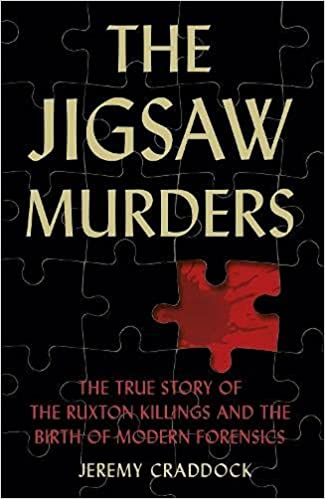 Over the years, I've written quite a bit about true crime and I once published a book (known by various titles, including Catching Killers) which focused on crime investigation and forensics as well as some famous cases. I've often thought about writing a book devoted to a single case, but I've never got round to it. I did, however, once draw up a pitch for a non-fiction study about the Crippen case (which also featured in my novel Dancing for the Hangman) and made some notes for a slightly less well-known case which has also fascinated me for ages, the Buck Ruxton case. One of the attractions of the latter case (my book was going to be called The Cyclops Eye, but I didn't get much further than the title!) was that nobody else had studied it in depth in modern times.

Well, now the gap has been filled, not by me but by Jeremy Craddock in The Jigsaw Murders, published by The History Press (an excellent indie publisher by the way; they once published a Murder Squad anthology and were good to work with). Jeremy is a journalist who comes from the Lake District and now lives in Cheshire, so I have a considerable fellow feeling for him. Regardless of that, I'm very pleased that he's produced such a well-rounded study of a major murder investigation.

Ruxton was a doctor working in Lancaster, a fascinating and historic town which rather strangely used to have a pub named after him. He was a strange man who murdered both his wife and his children's nanny before dismembering their bodies. The remains were ultimately found in the Scottish border country. An extraordinary forensic investigation was required; there's a very good book co-written by the pathologist John Glaister which details the medico-legal background. Jeremy Craddock goes into detail about Ruxton's background and some of this information was quite new to me.

The sub-title of the book is 'The True Story of the Ruxton Killings and the Birth of Modern Forensics' and the murders were shocking and extraordinary. The investigation was undoubtedly an important landmark, whether or not you identify it as the 'birth' of modern forensics. I'd say that this extensively researched study is a candidate for the various non-fiction awards.

This case is also the inspiration for David Stafford's "Skelton's Guide to Suitcase Murders", the second in his rather amusing series of "Skelton's Guides", which I have recently very much enjoyed.

Thanks, Mike. I haven't read those books so I'm glad of the tip.

The Ruxton case was such a sensation at the time that someone wrote a parody of the song "Red Sails in the Sunset":