Forgotten Book - The Criminal Comedy of the Contented Couple 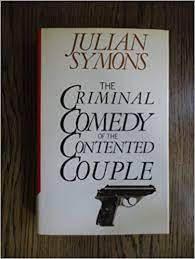 I first read Julian Symons' The Criminal Comedy of the Contented Couple not long after its original publication in 1985. I must admit that I found the title rather off-putting (in the US, it was retitled A Criminal Comedy) and the story didn't really strike a chord with me. I'd forgotten all about the characters and plot by the time I came to reread it the other day. And on the whole, my reaction second time around was much more favourable.

Symons felt it was one of his best books, noting in Jack Walsdorf's bibliography of his work that he found the writing of it unusually smooth, 'with none of my customary back-tracking and elimination of what seem otiose characters'. That said, although the writing is very snappy, with short scenes and multiple changes of viewpoint, there are a lot of minor characters, almost certainly more than necessary for the purpose of the plot. But they contribute to Symons' purpose, which was at least in part to offer a satirical portrayal of bourgeois English life; in that respect the novel now reads like a slice of social history.

There are plenty of enjoyable vignettes in this story. Most of the events take place in the prosperous town of Headfield, but there are important developments in Venice and on the island of Elba. One character, Jason Durling, is interested in an obscure writer called D.M. Cruddle (here Symons was reworking his brother A.J. Symons' The Quest for Corvo) and also records some events in his diary. An extract from a newspaper article at the start of the book tells us that two mysterious deaths connected with Headfield take place in Venice, but for a long time it's really unclear where the story is heading. On first reading, this irritated me, but this time I felt more sympathetic to what Symons was trying to do.

What strikes me very forcibly now is that, in a roundabout way, Symons was updating the classic Golden Age novel. Yes, the scourge of the Humdrums was playing the game! I don't think this has been sufficiently appreciated, either by me or by other critics. But consider the ingredients: a spate of mysterious poison pen letters; ingenious use of poison; disguise/impersonation'; literary references aplenty; an amateur detective solving a puzzle that defeats the official police; and even a thinly disguised version of the 'challenge to the reader' beloved of Ellery Queen and various other Golden Age greats, which is put forward in the newspaper article towards the end of the novel.

To cap it all, there is a pleasingly ironic finale that I'm sure Francis Iles would have approved. I don't claim that this novel is a masterpiece - the build-up is too fragmentary for that - but it's an enjoyable and unexpected piece of work. I'm very glad I gave it a second try.

This was the first Symons I read, and I really enjoyed it. It's perhaps not the most ingenuous or watertight mystery, but it's just a delightful novel.

Glad you share my (admittedly belated) enthusiasm for it, Kacper.

Martin, I've not read a lot novels by Julian Symons but I do regard him as someone who always tried to play fair, even if it was ultimately detrimental to the story (for example, "The Players and the Game") but I've never thought of him as a "Humdrum". I associate that term not with "play fair" stories as such but with those stories where there is no development of either plot or character (and this could apply to the greats, who could write dull stories); instead to me the humdrum stories are just endless plot exposition of the type "If Lady Mary had tea at precisely 1703, then Evans the butler couldn’t have spoken to Jane the maid who could have seen Sam the poacher, which means he might not have been in the woods to hear Jack the n’er do well tell Mrs Smith the blackmailer that she was heading for trouble, meaning the Rev Simper did have the opportunity to read the paper before confronting Digby the spiv…etc., etc..."

Hello Michael and thanks for your comment. 'Humdrum' was a term used by Symons in Bloody Murder to describe the pedestrian writing style of certain Golden Age writers. Many GA fans are strongly critical of him as a result. I think he misapplied it in a number of cases (for instance, Henry Wade) though some books by John Rhode, for instance, certainly were humdrum. As you say, the term 'humdrum' can be applied to some examples of dull plot exposition.