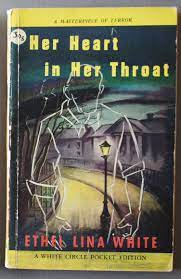 In 1942, two years before her death at the age of 68, Ethel Lina White published a novel which began life under the title Midnight House. The American edition (which I have in paperback) was renamed Her Heart in Her Throat, and after the novel was filmed in 1945, it also appeared under the title of the film, The Unseen. One special point to note about the movie is that the screenplay was co-written by Raymond Chandler, a crime writer utterly unlike White. For the film, the setting was also switched from the British town of Rivermead to the US.

The story has a number of classic ingredients. Our heroine is a governess in the Jane Eyre tradition. Elizabeth Featherstonehaugh is nineteen years old and has a fertile imagination. She's intrigued by her employer, Captain Pewter, but slightly bewildered by her charges, especially the young boy Barnaby. There's a creepy house next door which hasn't been opened up for years. And there's a killer on the loose...

At first I thought I was going to be swept along by this story. The opening is atmospheric and the set-up intriguing. There are one or two 'had-I-but-known' touches during the book, but these aren't intrusive. But there are some elements in the story, including vague and ambiguous references to a 'black man in the cellar', which have not worn well. As regards the murders, we're presented with a small circle of suspects, but there was something about the style of characterisation, and Elizabeth's interactions with the other characters that didn't really work for me.

As a result, I found myself losing interest in the second half of the book, despite White's best efforts to make sure that the tension kept mounting. There's a good story lurking in here, and I can see why the premise appealed to film-makers, but overall I don't think the execution lived up the potential of the plot.

Thanks very much - I didn't know that.