I'm always glad to learn more about the history of crime fiction in general and the Detection Club in particular, so I was delighted when Tina Hodgkinson,came up with some original research and kindly agreed to contribute the following guest post:

'When I was recently preparing a talk for the Agatha Christie Festival, I contacted Martin about the Detection Club’s premises in Kingly Street, Soho which was briefly mentioned in his very informative The Golden Age of Murder. Kingly Street is the parallel road in between Regent Street and Carnaby Street. Given the redevelopment of the area, I was going to have to explore historical documents to see if they could provide a clue to the location. I’m very fortunate to work at the London Metropolitan Archives, so thanks to Mark Arnold, from the Public Services Team, for pointing me in the direction of the 1934-1940 London ordnance survey maps. On the map I found St Thomas's Church on Kingly Street, and as this looked promising, I booked a visit to the Westminster Archives, to view all the documents they had pertaining to the church, which included drainage plans and a correspondence file from the 1960s. Thank you to Cecilia and Hillary for all their assistance. Here’s a brief summary of what I found. 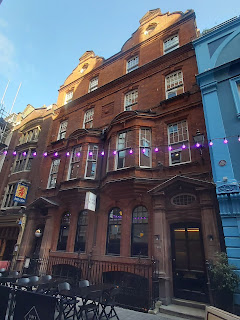 St Thomas's Church originally stood on the corner of Kingly Street and Tenison Court, previously known as Chapel Court. Today it’s been replaced with shops and offices. At one point the church fronted onto Regent Street and became known as St Thomas's Church Regent Street. The first church had opened in 1668, and was later rebuilt in 1702, and it is this latter church that the members of the Detection Club would have known. The church was demolished in the early 1970s.

Opposite the site of the former church, was St Thomas’s Vicarage at 12-13 Kingly Court. The Vicarage was a striking, substantial, red brick and sandstone building with a decorative, gabled attic and a basement. It dated from 1887 and was designed by Lansdown and Harris. From 1932, the top floor and the attic were converted into a self-contained flat for the vicar, while the remainder of the building was leased out for business purposes. The lower floors were used as offices, workshops and showrooms. By the late 1950s, the basement and the second floor were each rented as entire floors to two separate businesses. However, the office space on the ground floor was split into a two room and a one room rental, and the first floor as three single rooms. The correspondence I saw from the 1960s, listed the business tenants at the time, but there was no reference to the Detection Club or any of its members. However, based on the information we have, I think it is highly probable that the Detection Club met in St Thomas’s Vicarage. The best bit of all is that the Vicarage still survives. It is now a restaurant called Dirty Bones. Goodness knows what Eric will make of that!

P.S. If you want to visit Dirty Bones, there is a step free route from Carnaby Street to their Kingly Courtentrance. Staff informed me there is also an accessible toilet.'

That is so very interesting thank you. I will have an explore the next time I'm in London

I hope this is true: how cosmically appropriate that the Detection Club should have met in a Vicarage.

I reckon it is true, Michael!