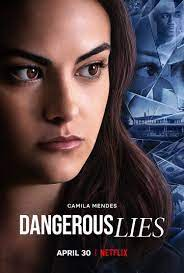 Dangerous Lies is a recent Netflix movie which was originally entitled Windfall. I was attracted, in part, by the presence in the cast of Elliot Gould, an actor I've often enjoyed watching. It's a twisty thriller, although it has to be said that some of the twists are rather random and unsatisfactory. Because it's a well-made film, I kept watching to the end, although there were plenty of plot elements that I found frustrating.

The film begins well. Kate (Camila Mendes) and Adam (Jessie T. Usher) are a young married couple who are short of cash. She's working as a waitress in a diner while he pursues his studies. One night Adam calls at the diner and while talking to Kate, a robbery takes place. Adam comes to the rescue, attacking the robber. He's a have-a-go hero, so I found it odd, and almost inexplicable, that four months later, he and Kate are so desperate for money that he's abandoned his studies. Later revelations in the convoluted script paint in more detail about the robbery, but I didn't find them convincing.

Kate has now taken a job as a carer for an eccentric but wealthy loner played by Elliot Gould. The two of them form a close bond and he gives her a cheque for $7000 when he learns of her financial struggles. Adam persuades her to overcome her reluctance to bank it (their moral compasses fluctuate quite a lot, it has to be said), but shortly after that the old man dies. It seems to be a natural death and Kate tells the authorities that he wished to be cremated.

The complications begin to pile on as the couple find a large stash of cash in the house. A mysterious lawyer turns up, claiming to have drafted the old man's will, which leaves everything to Kate. (The legal aspects of the story struck me as deeply unconvincing). It all becomes hopelessly unlikely, most of all the last few scenes. Yet despite this, my interest was engaged throughout, a tribute the actors rather than the script. I think this one is best regarded as adequate light entertainment.