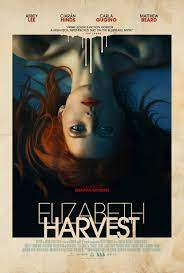 I was tempted to watch Elizabeth Harvest, a film I'd never heard of, by the presence in the cast of Ciaran Hinds, who made a great impression on me with his performance in that excellent series The Terror. Here he plays a very different character in a very different type of story, which fuses crime, sci-fi, and horror. It's an odd film, to say the least. Some commentators have understandably highlighted the parallels with the Bluebeard story, but I think that writer-director Sebastian Gutierrez was trying to do something fresh with the raw material.

The story seems at first to follow a very familiar pattern. A beautiful young woman, Elizabeth, has just married a much older man, the very wealthy Henry (Hinds) who is a brilliant scientist. He takes her to his very ritzy home, and she meets the gorgeous housekeeper Carla (Claire Gugino) and Henry's blind son Oliver (Matthew Beard, who played Max Lieberman in Vienna Blood). There is, however, a locked door to a mysterious room. Henry tells his new bride that this is the one bit of the house she is not allowed to enter. Oh dear. Guess what she wants to do?

Elizabeth does indeed make it her business to enter the locked room, and surprise, surprise, makes a gruesome discovery. So far, so predictable. But now the story takes an unexpected turn and we find that, rather than watching a formulaic horror movie, we're involved with something more ambitious and distinctly stranger.

Elizabeth is played by Abbey Lee, who I gather is (and I can believe it) a super-model. It seems to me that one of Gutierrez's key preocuppations in this film is beauty. Everyone and everything seems rather glamorous, but also has a dark side. The story is serpentine, but on the whole I didn't find it as emotionally engaging as it should have been. A bit less glamour and a bit more pace wouldn't have gone amiss. The Terror was subtler and much more memorable.