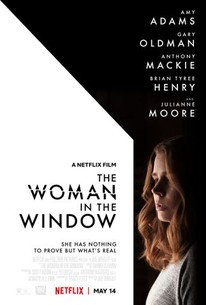 The Woman in the Window is a film based on A.J. Finn's bestselling novel, which I enjoyed reading when it was first published. It's a gripping book. Netflix must have believed it had blockbuster potential, but the movie has taken a pounding from the critics. The book itself borrowed the title of a famous film noir. It makes a virtue of its referential nature, and that seems to me to be obviously legitimate. True originality is very rare anyway. The question is: is this movie really as unsatisfactory as many good judges suggest?

The influence of Hitchcock is apparent throughout, even more than in Brian de Palma's thriller films. Amy Adams, who was so good as an addict in Sharp Objects, plays another deeply troubled woman, the agoraphobic Anna. It's a testing role and in my opinion she does a good job. She keeps an eye on her neighbours, in classic Rear Window fashion, and becomes intrigued by her new neighbours, the Russells.

In due course she encounters a problem of the Phantom Lady sort. Jane Russell, attractive blonde wife of a controlling husband and mother of a fifteen year old boy, comes round and they form a tentative friendship. But then Anna thinks she sees Jane being murdered. The cops are called but Mr Russell (Gary Oldman, whose part seems under-written) duly produces his attractive blonde wife, safe and well. The snag is that she is not the person Anna met.

I must confess that I love that kind of premise. Much depends on how it is resolved and my own feeling is that the storyline, tortuous as it is, makes a better fist of tying together the plot strands than is often the case. Yes, this is certainly no masterpiece. I do understand the critics' reservations, but judged on its own terms, the film seems to me to offer suspenseful entertainment.