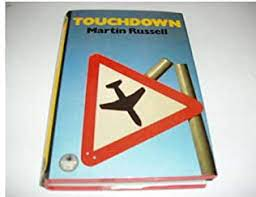 Martin Russell was a very well-established author by the time he published Touchdown in 1979.  In that year, he was elected to membership of the Detection Club. He'd also been involved with the Crime Writers' Association for a number of years. He'd written series novels, featuring the journalist Jim Larkin, and numerous stand-alones. Yet I can't trace any discussion of Touchdown anywhere. If there's anything I've overlooked, I hope that eagle-eyed readers of this blog will let me know.

Touchdown is an unusual novel which in many ways encapsulates Russell's strengths and also certain shortcomings. It's definitely a book which moves in a direction that is totally unexpected - at least I didn't expect it! And because of the Big Twist, it's hard for me to comment in any detail without spoilers. But let me give you a flavour.

The story opens with Julian Phillips at an airport. It's a relatively small airport, somewhere in the provinces. The place is quiet...too quiet, as the old cliche goes. We gather that Julian is waiting for a plane to land and that one of the passengers is his wife Angela. But there's something odd and unsettling about the whole situation.

It starts to look as though some monstrous conspiracy is taking place. Has the airport been taken over by some malign force? We also learn about troubles in Julian's private life and his affair with a much younger woman. For some time I felt that this read more like the script for a routine TV thriller than a Collins Crime Club novel, with all the action compressed into a few short hours and an absence (or so I thought for most of the book) of dramatic plot developments - it all seemed to be build-up rather than delivery. However, Russell certainly bamboozled me with his later revelations. Did I find them altogether convincing? I'm not sure I did. This is partly because I never really warmed to Julian and partly because the sense of terror that Russell tries to work up needed more evocative prose, something more in the Cornell Woolrich vein. But Touchdown is a clever story and like its author it deserves to be better known.

Martin, you've mentioned Martin Russell a few times now on your blog. I have a vague recollection of him having once written a novel with a squash setting (a game which you said, on an earlier blog post, that he played). If I am right, do you by any chance know what the novel is called (so I can search for it)? I ask because squash is my main sport, and while I know of various crime novels set in the world of tennis I have never read any with a squash setting! Thanks, Martyn

Hello Martyn. That one doesn't ring any bells with me, I'm afraid, but there are plenty of his books that I haven't seen. I shall keep an eye out...

Although it's not about Squash either, I know, there's a very entertaining crime novel about real tennis that is worth reading: Jeremy Potter's 'Hazard Chase'.

Thanks, Christopher. Oddly enough I think I may have a copy of that buried somewhere but I'm pretty sure I've never read it. Sounds as if I should.

The squash novel in question is Double Hit.

Thanks very much, Peregrine. That's really helpful. I shall now look out for it, even though it's a long time since I last played squash myself...

Many thanks, Peregrine, I've just ordered an ex-library copy I found advertised on Amazon. Martyn

Excellent, Martyn. Look forward to hearing what you make of it. The wonders of the blogosphere!

I've now done some further research and found an admiring review of Double Hit from none other than Edmund Crispin. Sounds very promising.