The Disappearance of Harry - 1982 TV movie 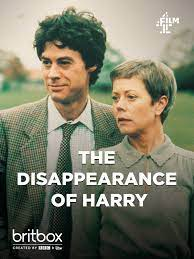 I've recently enjoyed watching One Foot in the Grave all over again, admiring not only David Renwick's brilliant writing but also some excellent acting. Annette Crosbie, for instance, is great as Margaret Meldrew and when I came across a film from earlier in her career, The Disappearance of Harry, I was intrigued and decided to give it a go.

This is an obscure film, and although it has a number of very appealing ingredients, I have to say that its failure to make a lasting impression is no real surprise. The writers, Howard Wakeling and Joseph Despins (Despins also directed) seem to have had rather brief careers and although there are genuine signs of talent in the build-up of the story, its anti-climactic finale reveals that they didn't think the story through (a striking contrast to the way David Renwick writes, by the way). Or perhaps they did have a concept in mind, but it was simply too flimsy to work.

There are some decent actors in the cast, including David Calder,  Philip Locke, and Dudley Sutton, but Annette Crosbie carries the film. She plays Lizzy, a wife and mother who works on the shop floor in a Nottingham factory. Her husband Harry has his birthday at the start of the film, but is clearly distracted. Soon he leaves home, taking his personal belongings with him, together with all the photos of him in the family album. Lizzy is distraught and completely baffled.

As she tries to find out what has happened to Harry, she finds herself on the edge of various politically-driven conspiracies: one involves a bunch of trade unionists resistant to new technology, another involves a far-right political party. There's a mysterious message in a newspaper, a puzzle about an old watch bearing a date that never existed, fascinating scenes set in Nottingham's caves (which I must visit one day) and a bomb explosion. Oh, and Lizzy has a fling with a sexy young journalist (Cornelius Garrett). The dialogue refers explicitly to the fairy-tale feel of the storyline, but overall the story gives the impression of being a collection of ideas, rather than anything coherent.

I must say that I found this film perfectly watchable and it's certainly never dull, despite a consciously mundane ambience.  But in the end I also found it frustrating. I imagine that most viewers, like me, would like to know exactly what happened to Harry. Spoiler alert: solving that puzzle is not what the film is about.