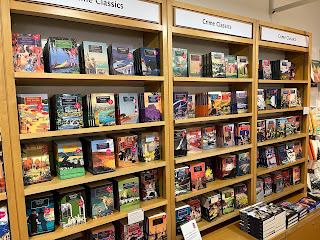 In my online writing course Crafting Crime, I make the point that confidence counts for a good deal in writing. But confidence is fragile (there are plenty of lived examples in The Life of Crime, some of them rather poignant) and writers often find their morale needs boosting. Well, having just returned from London after an exhilarating weekend, I can say that I'm in very good heart, for a host of reasons. One of these, I must say, is that it was fantastic to see so many copies of my books (not to mention my Golden Age map, This Deadly Isle) for sale in the British Library shop. In fact, I don't think I've ever seen so many of my own books in a shop, anywhere.... 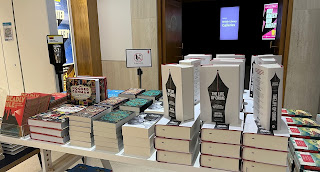 At first, though, it seemed that things might go seriously awry. An event was planned for Friday, which would involve me, the Rev. Richard Coles and Laura Wilson in conversation at the British Library. Many tickets were sold, and I was really looking forward to it. But then disaster struck. As a result of a couple of electrical fires, it became impossible for the show to go on as planned. It was to be livestreamed, but during the course of a convivial lunch with John and Jonny of the Library's publications team, I learned that this was not going to be possible. So it became a recorded event, and part of it would involve me giving an impromptu presentation. It was all very unexpected, but I drew fresh energy from a convivial afternoon get-together with Moira Redmond, Jim Noy, Chrissie Poulson and others, and as things turned out, all went well. Richard, whom I'd never had a chance to talk to previously, but whose new detective novel I read over the weekend, was not only charming but generous in his comments about my writing, and Laura did a great job. I gather that everyone who paid for tickets will be refunded and the event will be made available on an open access basis. 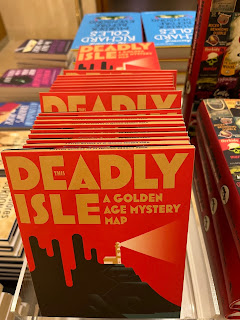 The following day, Bodies from the Library was due to take place after a three-year absence (though as with Alibis from the Archive, there was an online-only version last year). The volunteer team and the British Library staff worked tirelessly to make sure that it could go ahead, even though it was no longer possible for the Knowledge Centre to be used. The whole event was held in a rapidly reconfigured Terrace Restaurant. And it went really well. Jake Kerridge, Moira, Chrissie, Tony Medawar, Caroline Crampton, John Curran, and David Brawn were all very good and I enjoyed my session, talking to Chrissie about The Life of Crime. 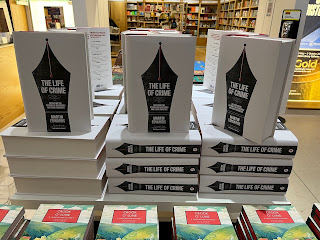 It was also wonderful to see so many old friends and to meet some nice people for the first time, including fellow Head of Zeus author Tom Mead. Online events are invaluable and, I'm sure, here to stay, but you can't beat the personal contact that comes with a live event. Twenty-five or so of us got together on Saturday evening for drinks and a meal, a nice way to round off a day that almost didn't happen, but - thanks to the hard work and dedication of those who turned potential disaster into a triumph - proved to be a great success.

It was a fabulous event, and so good to be there in person again. I am full of admiration for all the people at the British Library and the presenters and contributors who managed miraculously to make the whole event run so smoothly in the face of the obstacles.

So many excellent talks, the chance to discuss GAD with like minded people and the Barbican Libraries Display and the Bookshop - I was in heaven.

I shall draw a veil over the fact that I bought more books than my bank account will be happy about and now have an enormous list of books to look out for and read!

Yes, we all know that feeling about the imperative to add to the ever-increasing TBR pile!

It was a terrific day and it was so good to get together with so many old friends and make some new ones.