Last Thursday I heard the sad news that Alanna Knight had died. Alanna was a leading light in Scottish literary circles and she was a friend of mine for more than thirty years. I've mentioned her a number of times on this blog, most recently when she was involved in organising the CWA conference in Edinburgh in 2017. I had the pleasure of presenting her with a bouquet of flowers as a token of our esteem for her contribution to our community of crime writers. 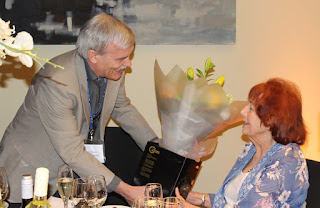 She was a stalwart of the CWA and I first got to know her when she and her husband Alistair organised an earlier conference in Edinburgh at the end of the 1980s. That was a memorable weekend and in the years that followed I saw her quite often, not only at annual national conferences but also at events organised by the CWA's northern chapter, which she attended regularly before the Scottish chapter developed. Among those events was a visit to Magna Large Print in Yorkshire; looking back at the photos of that occasion is nostalgic, as they depict several other fine writers who are no longer with us, in the company of a relatively youthful Martin Edwards.

In addition to her many novels, Alanna was a biographer and playwright and expert on the work of that gifted fellow Scot, Robert Louis Stevenson. As a crime writer, she was probably best known for her long series of historical mysteries featuring Inspector Faro. Some years ago I was delighted when she agreed to contribute a Faro short story, "The Case of the Vanishing Vagrant", to a CWA anthology I edited, Guilty Consciences.

Alanna was made an MBE, a well-deserved reflection of her status in the writing world. She and I had many convivial conversations over the years and she was particularly kind to my children in their youth, when I used to drag them along to CWA events. I think it amused and appealed to her that my wife and I brought them. I shall remember her fondly as someone who was always great fun to be with.