I'm not quite sure what to make of Repression, a recent film also known as Marionette. Is it an ambitious and interesting failure, an unusual suspense story, an entertaining horror movie, or a film that collapses into incoherence - or perhaps all of those things?  I was attracted to it by the cast and the claim that it's a 'Hitchcock-esque' thriller, but it's not a description that makes a lot of sense (and a cynic would say this is in keeping with some aspects of the script). It's a film that bears little resemblance to any Alfred Hitchcock movie I've ever seen. 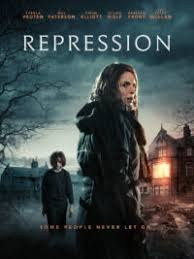 In the opening scene, a man climbs to the top of a tower, says a few words, pours petrol on himself and lights a match...It's a horrific scene, not explained for some time. We then shift to the arrival in Scotland of Marianne (Theklan Reuten), a gloomy therapist who has taken up a new job in a new country. We gather that she's left north America after some tragedy in her life. She starts work alongside colleagues played by Bill Paterson and Rebecca Front, two highly appealing and reliable actors who only have small parts, but give the film a sense of solidity in its early stages.

Marianne is dealing with some very troubled children, including a deeply disturbed boy (Elijah Wolf) who draws pictures of disasters and, it seems, has some gift for foretelling the future. She does her best to relate to him, and in her spare time she find solace in a local book club - which seems to meet with astonishing regularity compared to every book group I've ever encountered. These scenes, which have considerable potential, are in fact rather disappointing as the script shoe-horns in various pretentious observations which seem to connect to the themes of the story. It's all a bit clunky.

Marianne finds herself attracted to an affable chap called Kieron, but it's soon clear that this relationship isn't going to end well. Never mind her patients, she too begins to disintegrate mentally. And the plot twists come thick and fast...

As I've often said, I like ambition in a storyline. There are some good ideas here, and the film is well-made, so I remained engaged, despite a series of highly unlikely developments. Overall, though, it doesn't work as well as it might have done. Perhaps the writing wasn't disciplined enough. I suppose my final verdict is that Repression is an interesting failure. But that's a lot better than being a boring failure.