The death of John Le Carré, just announced, means we have lost one of the greatest British novelists of the last sixty years. Yes, he rose to fame as a writer of crime fiction and espionage novels, but if anyone's career shows that commercial fiction may have serious literary merit, it's Le Carré's. 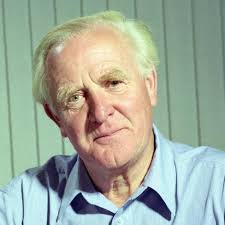 I first came across his name when I still at junior school. My father was seriously ill in hospital and my mother gave him a new paperback in the hope of aiding his recovery. It was The Spy Who Came in From the Cold and he thought it was brilliant (and he did recover!) Duly intrigued, I went to the local library and read the first two Le Carré novels, Call for the Dead and A Murder of Quality, before devouring The Spy. So you could say I've been a fan for over fifty years.

For me, it's the blend of insight into human behaviour and lucid prose in addition to a natural gift for storytelling that makes his best work so compelling. George Smiley is a fascinating character, and the fact he was based in part on the author's mentor in espionage and fellow crime novelist John Bingham gives the portrayal an added piquancy. Not all his books were entirely successful, but I see that element of variability not as a failing so much as the hallmark of an ambitious writer. The better writers take chances. The risks don't always come off, but that doesn't mean they aren't worth taking. And at his best - in Tinker, Tailor, Smiley's People, The Night Manager, Our Kind of Traitor, and so on - he really was a master of his craft.

Let me conclude this brief post on a personal note. Last year, I approached John Le Carré to see if he would be willing to contribute to Howdunit. He was elected to membership of the Detection Club long ago, but I've never known him attend one of the Club dinners, and I've never met him. So I anticipated either a reluctance to contribute or a failure to respond. There wasn't even a token payment on offer - the book was compiled for the benefit of Club funds. To my great delight, my proposed inclusion of a pithy extract from The Pigeon Tunnel, which I thought fitted in perfectly with the overall scheme of Howdunit, was agreed. He certainly didn't have to participate, but I'm glad he did, and our book is the better for it.

Sad news indeed. I am working my way through Howdunnit so I shall skip ahead and look out for John Le Carre's entry.