The Undoing, which came to an end on Sky Atlantic yesterday after the sixth and final episode, is a glossy thriller that has kept me interested throughout, although with some reservations, until letting me down at the end with a peculiarly unimpressive climax. It's one of those shows on which no expense has been spared and the stellar cast - led by Nicole Kidman, Hugh Grant, and Donald Sutherland - was top-notch. In this post, I'm going to discuss the way the story concludes, so beware spoilers. 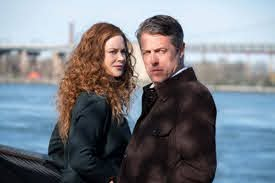 The serial is based on a novel called You Should Have Known, a title which rather gives the game away. Suffice to say that this murder mystery wasn't in the same league as Broadchurch. But the performances of the lead actors were so compelling that until last night, I suppressed my doubts about the rather stretched-out storyline, which involves the brutal murder of a woman who has been having an affair with Grant (a specialist in cancer treatment) and given birth to his child - a child rather overlooked in the later stages of the story, it has to be said.

For me, the show fell apart in the courtroom, at the same time as Grant's defence. His supposedly hot-shot lawyer agreed to call Grant's wife as a sort of character witness. Why anyone would imagine that a jury would pay any attention to a wife saying that her husband was innocent, when she had no evidence to support that other than her gut feel as a psychiatrist, I really don't know. I know things are different in the US, and I'm no criminal lawyer - but even so. Predictably this bizarre error led to catastrophe, as well as the entertaining sight of the lawyer blaming anybody but herself for the ensuing debacle. At least this incident distracted attention from her previous weird and tasteless decision, to call the young son of the deceased as a witness for the defence.

These unlikely things are done, of course, to inject drama into the story. And yes, crime writers do this all the time - it's why seasoned police officers often cringe at the way we portray police procedure. For me, the test is whether the story works on its own terms. To my disappointment, last night it didn't, and the interest generated by earlier episodes of The Undoing was undone.

I was thinking of watching this after finishing DNA which I thought was excellent and a satisfactory conclusion. However, your review has saved me much time! I can't bear a satisfactory or believable conclusion.
It is interesting what you say about police. My husband was a police officer with Merseyside Police for 30 years before he retired and he can't bear watching British police dramas as they always get the procedural details wrong and it infuriates him. I just watch them alone now!!

Thanks, Jane. My problem with the finale was not so much the question of whodunit, which annoyed some people, but the multiple contrivances. Whilst crime fiction does typically involve some contrivance, it's better for the machinery not to creak as much as it did in this episode. A pity, because the show had a lot going for it. But the best crime stories have much better finales.