John Cooper, co-author with Barry Pike on an excellent book about collecting crime fiction, is one of a small group of experts who give me suggestions for short stories to be included in anthologies, and through him I've come across his son Jonathan, the guiding hand behind a splendid enterprise known as the Bibliomaniacs. I feel they deserve loads of encouragement and so I invited them to contribute a guest post to this blog. Here it is:

'Hello everyone. We represent the Bibliomaniacs. We absolutely love to sell books and eat chocolate! We would like to thank Mr Edwards for letting us write this Blog on his page. It is a great honour to have an article on such an amazing and famous writer's page.

The Bibliomaniacs are the youngest antiquarian booksellers in the world (aged between ten and thirteen). There are currently 25 of us and we meet every Thursday to discuss recent book sales, and to discover more about the history of literature, books and printing. We are members of the PBFA and have attended four PBFA London book fairs as exhibitors.  Some of you may have even bought from us!

We have done a lot of Fairs at Papplewick School in Ascot, which is where we are based. We have two separate groups of boys in this group at the moment because of the current “bubble” rules in schools. We have the more senior Bibliomaniacs who do the more serious parts, for example cataloguing and thinking of ideas. Then we have the Miniacs, who are a bit more wild and smaller: as the name suggests. We always have a lot of fun in both groups though!

You can check us out at https://www.thebibliomaniacs.co.uk/. Our Latest Catalogue is about Sherlock Holmes and his Rivals. It can be found here at https://static1.squarespace.com/static/578a84165016e131ea77905d/t/5fc918b526feeb2c21f4fd94/1607014585675/Sherlock+Holmes+with+SOLD.pdf. The focus of this catalogue is (as is evident from the title) Sherlock Holmes and his near contemporaries. What makes the stories so popular today is undoubtedly their atmospheric descriptions of Victorian London: foggy, crowded and metropolitan, and with a seeming criminal underworld. The books are excellent and so are plenty of the so-called ‘pastiches’ or reworks of Sherlock Holmes. We particularly enjoyed cataloguing Strand Magazines with their advertisements for long-gone products and diverse articles. We also enjoyed learning about less well-known (to us) detectives such as Dr Thorndyke and the Old Man in the Corner. All of our books are worth buying from the catalogue and we have tried to price reasonably. Many may not be in the most tip-top condition but we’d rather read a first edition for not much more (or even less) than it costs to buy a crummy paperback (obviously we don’t mean the British Library series…)

We have an amazing and rather quite knowledgeable founder and “General Factotum”, our Classics teacher Jonathan Cooper, whose father has collected and written about crime fiction for longer than we have all been alive put together (not really). Mr Cooper helps us with the huge things like making sure everything is alright and also proofing some things on the catalogue. He has been an amazing leader amongst all of the difficulties and hardships along our way. We do actually have a boy “ Head Bibliomaniac” who is really in charge. His name is Rupert but currently in these strange times he is unable to be at school and help us as much as he could.

Thank you again to Mr. Edwards for letting us write this and we hope that you all had as much fun reading this article as much as we did writing it. We have two or three more catalogues coming up in this Crime Fiction series and (spoiler alert) some of Mr Edwards’ early works will appear in a later catalogue.
Andrew Zhang and Jamie Pike  (info.bibliomaniacs@gmail.com)'

And here is a member of the team, who happens to be called Sherlock. So the picture can be captioned 'Sherlock as Sherlock reading Sherlock'! 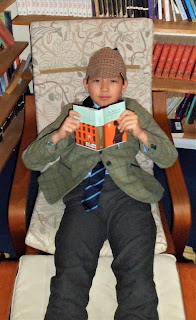 My thanks go to Andrew, Jamie, Jonathan Cooper, and everyone else involved with the Bibliomaniacs. I only wish there had been such a group at my own school!
Posted by Martin Edwards

How fantastic! Well done for giving them a platform Martin, and they sound wonderful. How nice that new fans are appearing. They also sound like someone should write a book about them....

It really is rather wonderful to see, isn't it? Jonathan is doing a great job in encouraging excellent habits and good taste in literature!