You never quite know how people will react to a book on which you have laboured long and hard. I guess the truth is that simply getting a reaction is positive. Almost anything is better than having your work ignored! But of course it's better if readers 'get' what you are trying to do. So I've been delighted to see that Howdunit has featured prominently in lists of best crime books of the year. 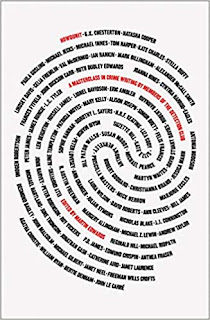 Jake Kerridge picked it as one of his favourites in the Daily Telegraph and Barry Turner did likewise in the Daily Mail. Among crime novelists, Christopher Fowler featured the book as one of his own picks, and so did the very knowledgeable commentator Ayo Onatade, writing for Shots.

This is all very heartening, for me and for the contributors, perhaps especially those writers who haven't published much in the last few years. I was so pleased that it was possible to include contributions from the likes of June Thomson (a fine writer whose early work often drew comparisons to P.D. James), Michael Hartland, Michael Pearce, and two peers of the realm, Bertie Denham and Janet Neel. And I was grateful to Len Deighton, Liza Cody, Kate Ellis, Peter Lovesey, and Mike Lewin for sourcing some of the illustrations which I think add another dimension to the material (for instance, Kate's flow chart of one of her plots and the Clewsey cartoons).

Revenue from the publication of this book will help to sustain the Detection Club as it heads towards its centenary in 2030. I'm hopeful that beginning writers will find the range of tips extremely useful and also that readers who have no ambitions to write but are intrigued by the writing process and the ups and downs of writers' lives will find it entertaining and informative. So if you're looking for last minute Christmas ideas for the crime fans in your life....

Rumour has it that there might possibly be a copy under the Christmas tree with my name on...not that I know anything about it, of course.....

Fingers crossed, Fiona! Hope you have a wonderful Christmas and thanks for all your support, not only this year, but over the years.

I too have high hopes of a ‘Howdunit’ Christmas. Keeping my fingers crossed!

Wishing you and yours a Merry Christmas and a Happy, Healthy New Year,

Thanks, Paul, and have a great Christmas!