Kate Ellis is a friend of mine whose books I've been reading ever since we met at a crime festival in Manchester, more than twenty years ago. As a Christmas treat, I read her The Burial Circle, which is set over Christmas 2020 (although thankfully the pandemic doesn't play a part: fiction can be so much more pleasurable than real life!) Afterwards, I started work on a blog post about her work which was interrupted by other projects. Alas, due to my techno-incompetence, this was published incomplete. Now at last I've got round to revising and expanding that post, so apologies if you've read some of this before. 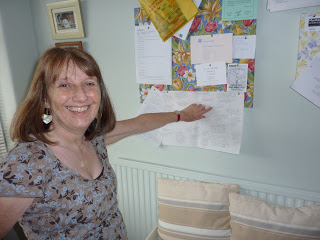 Kate contributed an interesting essay on her approach to plotting a crime novel to Howdunit.  She also kindly allowed us to reproduce one of the flow charts (see also the photo above) which she uses to keep track of her plot. I find it interesting to compare and contrast her methods as a writer with mine and those of Ann Cleeves which I discussed in a recent blog post and the nature of the similarities and differences in our respective storylines, a subject which I've also ruminated on in this blog.

The planning techniques that writers adopt are many and various, even in the case of authors working in the vein of the traditional mystery. Agatha Christie made random notes in an exercise book. Austin Freeman wrote, as you'd expect from his stories, very neat and meticulous preparatory notes, accompanied by sketches. Christianna Brand was also a great note-maker. I hope to write more about the methods of both Freeman and Brand in due course. Suffice to say that if I attempted to work from a flow chart, I'd be left with a mass of demented squiggles...

The Burial Circle is the 24th Wesley Peterson novel, but unlike many series of such length, there's no hint of diminishing powers here. The story is entertaining from start to finish, with a very convoluted puzzle that delivers great value for any readers who like an elaborately plotted traditional mystery. 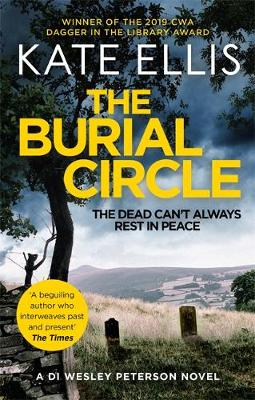 The story opens with a young woman hitching a lift. It's foreseeable that bad things are going to happen to her - but what, and why? Then the scene shifts to a church, as a vicar is approached by a person who wants to confide something about an imminent murder. This is an intriguing scenario, which would spark the whole mystery in many novels; but such is the complexity of the plot that it is only a subsidiary thread of the overall storyline.

The Burial Chamber is one of my favourite Kate Ellis books, close to if not top of the list. I'm surprised it's not (so far) been more widely discussed. I've long been intrigued by certain correspondences in our writing and I keep waiting for some academic to produce an authoritative analysis of her work. This post isn't a substitute for a detailed objective study, but I am tempted to muse on her methods and the thought processes that may lie behind them.

Kate and I are of a similar vintage, come from comparable backgrounds, have spent almost all our lives in the north west, and share some of the same literary and cultural tastes, so it's not surprising that we enjoy each other's work. Nor that there is a degree of overlap between our writing, even though her story structure techniques are very different from mine. The Peterson series template, for instance, is to present two plots on parallel lines, one of them set in the past. This method sound restrictive, but it works well in practice.

We are both very keen on history, but Kate's specialism is archaeology, about which she has (like Agatha Christie) a great deal of knowledge. Also different are her methods of depicting character and setting, and her prose style. The similarities between our works of fiction are most striking in the Peterson books, less so in the Joe Plantagenet novels and the Albert Lincoln series (although one non-Peterson book did give a fresh spin to a classic Christie concept). Contrary to what you might think, though, the points of similarity don't arise as a result of our discussing plots with each other.

I ruminated on all this as I read The Burial Circle. Sometimes I can solve Kate's mysteries because I can recognise and identify with the authorial thought processes. Here she fooled me completely. And the reason why she did this is one that I, at least, find interesting. So I'll try to explain it - though to avoid spoilers, I need to be cryptic.

Kate and I both have imaginations that are sparked by vivid and macabre scenarios - this is why we both love the early episodes of Taggart, written by Glenn Chandler. I'd assumed from the title and jacket artwork that this book would feature a stone circle, something which I'm determined to feature in a forthcoming (and as yet unwritten) story, but this proved not to be the case. There were, however, two aspects of the storyline, concerning the activities of a modern day psychic and the historic sub-plot, that rang a loud bell with me. They represent a variation on two ideas in another Christie novel which I've been re-examining, since they appeal strongly to me and are well-suited to the Rachel Savernake series, which pays conscious and extensive homage to Golden Age tropes.

Incidentally, there was an ingredient in the finale of Gallows Court which I included as a jokey tip of the hat to an over-the-top plot device in an entertaining book by John Dickson Carr. I was fascinated to find afterwards that this element also featured in one of Kate's books, but I gather she hasn't read the Carr novel: what appealed to her was the bizarre and memorable nature of the concept that Carr had adopted for his story. The three books I'm referring to are, by the way, entirely distinct from each other. In other words, originality tends to come not so much from the raw material as from 'the way you tell 'em.'

I speculated to myself that Kate's method of solving the mystery of the hitch-hiker in The Burial Circle might resemble my resolution of Rachel's next case, the Christie-inspired story which is my current work-in-progress. It turned out not to be, because what I hadn't realised was that the main plot driver of her book is a very different crime fiction trope, which I've referenced in passing in a short story, but never in a novel. It's mainly associated with suspense stories rather than whodunits, though it has been used rather craftily in two or three detective stories on classic lines, including an under-estimated novel by Leo Bruce. A version of it also featured in an early Taggart storyline. Here, Kate disguised what was actually going on with admirable cunning.

I derive a good deal of pleasure (and learn a lot) from trying to deconstruct the stories of fellow crime writers - it tends to make me appreciate their skills more than ever. The Burial Circle was definitely a case in point. And even if you don't share my interest in plot analysis, I think you'll find it a very enjoyable, twisty whodunit.